The Day Editorial on TBBCF 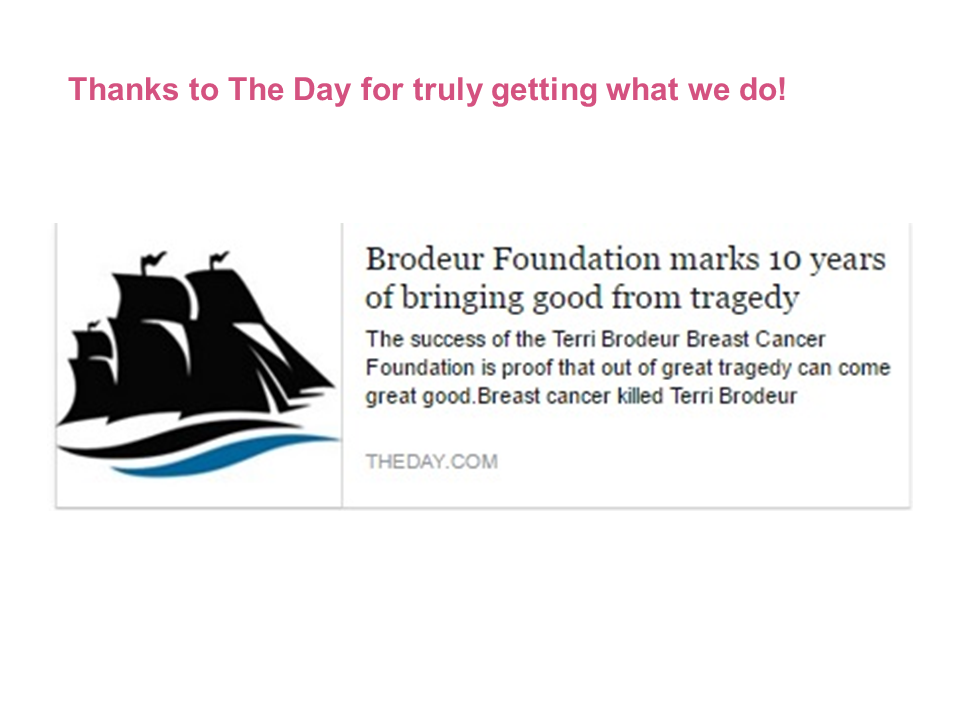 The Day
The success of the Terri Brodeur Breast Cancer Foundation is proof that out of great tragedy can come great good. Breast cancer killed Terri Brodeur in 2005, her 41st year, leaving behind three children and a husband. Before her death, Terri became good friends with Norma Logan. They had something in common — breast cancer. When Norma decided to create a foundation to raise money for breast cancer research, she named it in memory of her friend. Norma would succumb to her cancer in 2006 before the foundation’s first fundraising walk. The walk went on with Brodeur’s husband, Timothy F. Brodeur, a senior manager at Pfizer, playing a leadership role. In January 2008, Tim Brodeur became another victim; in despondency committing suicide at his wife’s grave in Old Saybrook.

That’s a lot of tragedy, but it is not the end of the story. This month the Terri Brodeur Breast Cancer Foundation celebrates its 10th anniversary. The southeastern Connecticut-based nonprofit has awarded $3.4 million in 34 grants, two weeks ago distributing $400,000 to four breast cancer researchers. In keeping with Logan’s vision — reflecting her concern that large education and advocacy organizations spend too much money on administrative overhead — 100 percent of the money raised by the Brodeur Foundation goes directly to research. The organization accomplishes this by covering its administrative costs with either sponsor dollars or volunteer services. The foundation is also unusual in carefully targeting its grants based on the assessment of its own Scientific Advisory Committee, staffed with research experts. Based on the high number of grant applications — 45 for the most recent award period — it is clear the foundation has
caught the attention of the cancer research community. The organization’s primary fundraising event is the Walk Across SE CT, which takes place the first Saturday of October. In 2015, through the walk and other fundraising activities, the foundation raised $300,656. On March 28 from 5:30 to 7 p.m. at Connecticut College’s Crozier-Williams Center, the Brodeur Foundation will hold a 10th birthday celebration. Keynote speaker Dr. Priscilla Brastianos is a 2012 research grant recipient and director of the Central Nervous System Metastasis program at Massachusetts General Hospital. She will discuss her team’s successful use of a targeted therapy drug to treat brain tumors associated with the spread of cancer in the body, including breast cancer. Such research can save lives, providing a lasting legacy to those that science could not save.