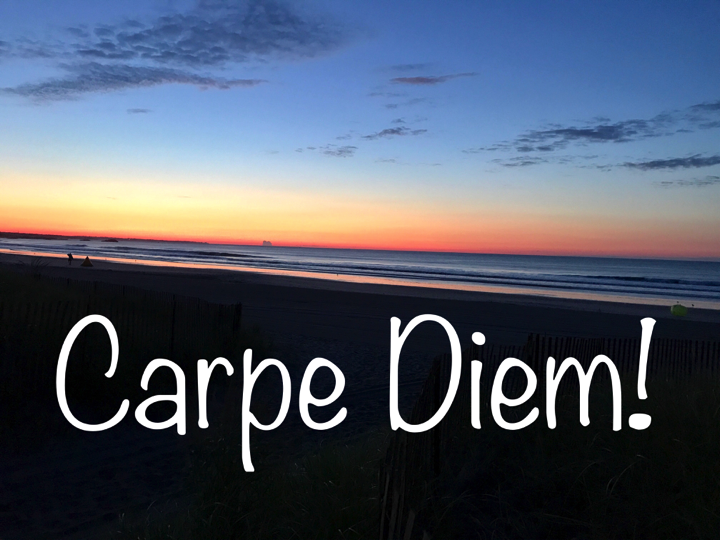 ***This post is a bit longer than most, however I wanted to convey the importance of what happened this weekend. 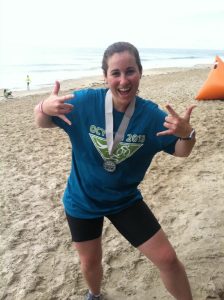 So far the 2017 triathlon season has left me waiting until the week before a race to decide if my body is really up for the challenge. I would either register days before a race or in some instances the day of the race. In September 2013, I completed my first ever sprint triathlon (1/2 mile swim, 16 mile bike, and 3.2 mile run). Since that day I developed big hopes, dreams and goals of doing longer distance triathlon races. In 2014 I completed three sprint triathlons and knew I could do more and was ready. That autumn and winter I trained my hardest with the best group of tri-athletes ever. It was early January 2015, that my friend Milly and I were deciding on a sprint, an Olympic (.9 mile swim, 25 mile bike, and 6 mile run), and a half iron (1.2 mile swim, 56 mile bike, 13.1 mile run) distance race. I easily convinced several other teammates to do the half iron race with us. It was shortly there after that I was diagnosed with stage IIIC inflammatory, triple negative, BRCA2+ breast cancer. My oncologist quickly put an end to my training, as it was too risky with the aggressive chemotherapy I was about to go through. 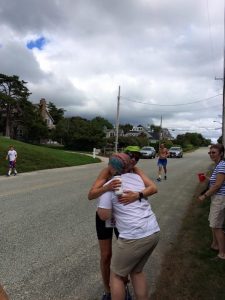 While my training was put on hold for the 2015 season, it didn’t stop me from encouraging and supporting my teammates through their training and races. In fact, they supported and encouraged me through each of my chemotherapy sessions. My dearest friend Terry took to writing and would post incredible stories of her training experiences and how she was overcoming obstacles in her training in order to ensure that she would be able to complete the Half Iron 70.3 distance that August. Terry dedicated her race to me, and in doing so she raised money to fund my medical expenses. The day of the race I was a spectator of amazing feats being overcome as the triathlon team took to new distances. I felt defeated that day…. cancer had won this race but I was winning the race of life, and someday I would have the strength to get to the Half Iron 70.3 distance. 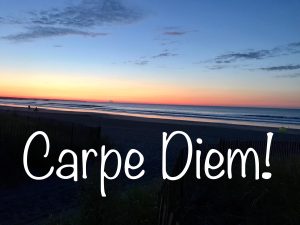 The 2016 triathlon season started out in a rebuilding stage. I had no evidence of disease in my body at the time. I was determined to do all six of the triathlons that I had wanted to do in 2015, I knew that I wanted to complete each triathlon even if that meant opting for the sprint distance over the longer distances. August 12, 2016 threw me for a loop. The cancer was back and I was in a very different medical predicament. Dr. Vanasse, my oncologist with Women and Infants, had referred me to Yale Smilow Cancer Hospital in hopes of doing a research trial, as the standard of care was not promising. I went to Yale and this is where I met Dr. Silber, my oncologist, where I’m pretty sure my first question to her was “Can I continue to do triathlon training?” Her response was all I needed at that moment, “You can do anything that makes you happy, just listen to your body and don’t do more than one concentration at a time during training”. This was when I first felt the desire to “carpe diem”, and I signed up for a seventh race that season. There was nothing that was stopping me. I started chemotherapy in October 2016, and my cancer remained stable until May 2017. I had a lump on my chest that seemed to have grown overnight. It was biopsied and determined that the chemotherapy was no longer working to keep the cancer stable. I started a new medication called Lynparza, which is a parp inhibitor that was on fast track with the FDA for use with breast cancer patients. A ct-scan on August 30, 2017 determined that Lynparza was not working as the cancer has progressed (grown in size). Dr. Silber ordered me to stop taking the Lynparza and that there was another research trial that was worth trying. Being that I needed to take a couple weeks off from treatment before starting a new trial, I again decided to “carpe diem”, there is no better day like today.

The 2017 triathlon season had already had great progress; to this date I had already completed six triathlons (two Olympic and four Sprint). These last two weeks I have felt stronger and the best I have felt in over a year. My friend Terry knew how much I wanted to do a Half Iron 70.3 and she gave me the courage and support to sign up for the Firmman Half Iron 70.3 on September 10. Terry even committed herself to doing the entire Half Iron with me. There was no question in my mind; I needed to do this race. There is a fear inside me that if I said no to this race, I would never have the opportunity to reach my goal of completing the Half Iron 70.3.

September 10, Terry, Marie and myself set out to Narragansett Rhode Island at 5:00 a.m. Terry and Marie registered for their races and I picked up my packet. We all set ourselves up in our respective transition area. Terry and I set out for the mile walk down the beach. The water looked relatively calm. Terry and I went in the water to warm up and get acclimated to the tide. Once we got out to knee depth we realized that the water was rougher than we thought. As our legs got tangled in some seaweed, we started to see quite large fish jumping in the water. That was when we decided that had warmed up enough. We went back to the shore for the pre-race instructions. Marie ran down the beach and wished us luck as we set out. The waves seemed extremely large just as the horn blew for our wave. Terry and I had to duck under crashing waves and after about the fifth wave, I came back up and realized that I had no idea where Terry was. It wasn’t until I reached the first buoy that I got my foot tangled in the rope and started laughing. Then I heard the familiar giggle of Terry just a couple yards from me.

We both got into a groove and swam very methodically down the coast, stopping only to have the guy in the kayak take our photo. Getting out of the water posed just as challenging as getting into the water, as we were racing the large waves and trying not to get pummeled by their crash. As we ran up the beach back to the transition area we were greeted by “strippers”, these volunteers tell you to lay on your back as they rip your wetsuit off of you faster than you can blink an eye. The volunteers then graciously lift you back up to your feet in one felt swoop. 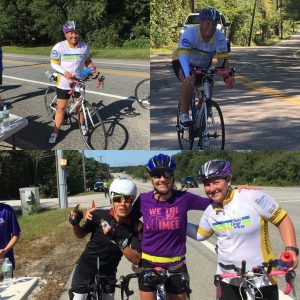 It was on to the bike. Terry and I clipped into our bikes and pedaled at a steady beat. The wind was at our backs and everything felt smooth. When we reached about mile 25, Marie sent a text message to Terry that she was riding her bike out to join us. The three of us pressed on, laughing and chatting about how awesome this race was going. Along the bike route we started to see some of our other triathlon teammates come out to cheer us on. Seeing them brought a whole wave of excitement back to me when all I could think about was how great it would feel to get off my bike. 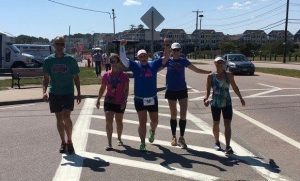 As I rolled into transition, I saw fellow tri-athlete teammates cheering me on. They even joined me for the first mile of the run. At this point my body was starting to ache, but I persisted to jog/walk. Steve, a race volunteer, rode a bicycle and stayed with Terry and me throughout the entire 13.1 miles. When I realized that my body was not going to allow me to jog any further, I asked Steve if he was ok with the fact that I was going to have to walk the next 10 miles. He was honest and said that it was fine, whatever I needed to do to get it done. By mile five I had to apologize to Terry that I was not being rude, I just could not talk and walk at the same time anymore. I was struggling to catch my breath and was at a loss for what to do. Terry encouraged me to eat some pretzels at one of the water stations and drink some water. This didn’t help much but was worth the try. 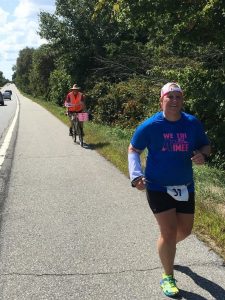 We had just come around a corner between mile five and six and there I spotted Milly’s white van. There in the road was Milly and Monika cheering me on and giving me hugs to keep going. I had to just keep putting one foot in front of the other. I was definitely slowing down and was getting grumpier by the minute. I started praying that I would get some pain relief soon. Then down the street came a black Lexus and an ambulance. My initial thought was that they were looking for someone who got hurt, and then it hit me that they were looking for me. Somehow the race committee was told that someone should check on Terry and me. This just infuriated me because if I needed help I would have asked for it. Terry even commented on how angry I was and that I actually picked up the pace at this point. 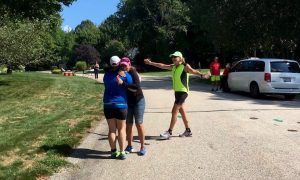 At about mile eight, Milly’s van approached again and Monika jumped out and joined Terry and me. At one of the next water stations I was really feeling the pain in my feet, legs, back and neck. Out of nowhere, Terry spotted a bottle of ibprophen on the table and encouraged me to take some. At first I refused then I thought better of it   and took two with some water. It took about a mile for me to feel a bit better and my mood improved tremendously. Marie met up wi 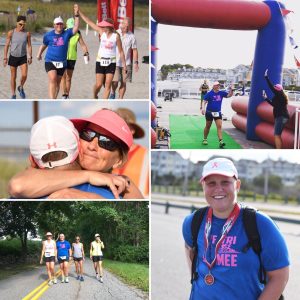 th us again on the run. As we neared even closer to the finish line I spotted another teammate, Brent and he joined us as well. It was such an amazing feeling knowing that so many of my teammates believe in me and encouraged me along the way to reach a goal of finishing this race. As I came across the finish line beachgoers, volunteers, teammates and fellow tri-athletes from the area greeted me with hugs and high fives. The emotions I felt were overwhelming; tears of happiness and disbelief that I had just achieved one of my greatest life goals. This “We TRI 4 Aimee” team is so much more than just a group of tri-athletes training together; this is a family of support and encouragement that makes a difference in the lives of everyone we meet.