After being told that I had no evidence of disease, I immediately went back into triathlon training mode. I had made a promise to myself that I was going to do those same six races that I was unable to do the year before. I was determined to get to the finish line. That summer a mastectomy of my left breast and reconstruction of both sides was scheduled for August 30, 2016. I had it all figured out, by that date I will have completed five of the six races leaving four weeks of recovery before the sixth race. I was right on schedule; my body was getting stronger, leaner and faster. The morning of August 12, 2016 I had a pre-surgical CT-scan. Later that afternoon I interviewed with a local newspaper and the Terri Brodeur Breast Cancer Foundation (TBBCF) as the 2016 recipient of the Greater Westerly Breast Cancer Honoree. It was during this interview that my mom interrupted to tell me that I needed to call my oncologist immediately. Sure enough the cancer had returned in my lymph nodes, changing the staging to IV/metastatic. This was a game changer.

Surgery for the mastectomy and reconstruction was canceled, and I was being referred to a larger educational hospital. At this time I was told that my only option was standard of care, which is chemotherapy (Abraxane), and that it would be in my best interest to research if there were any clinical studies for which I might qualify. As weeks passed, I decided that if I wasn’t going to have surgery, perhaps I could squeeze in another triathlon into the mix. That summer I completed seven Sprint Triathlons. On September 22, 2016 I learned that I qualified for a clinical study at Yale New Haven Smilow Cancer Center, ironically, a previous grant recipient of the TBBCF is overseeing this particular study. 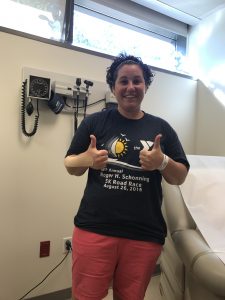 October 28, 2016 was my first infusion. I know for a fact that I am getting the standard care chemotherapy (Abraxane). However, the study I am participating in is a blind study, meaning I do not know if I am getting the study drug, which is either an immunotherapy drug or a placebo. I go to Yale for infusions once a week for three weeks then I have a week off. This will be the schedule until the chemotherapy stops controlling the cancer.

To date I have had very few side effects from the infusions. I lost all of my hair within the first four weeks, the nausea is controlled with medication and I developed an allergy to the chemotherapy, which is being kept at bay with the use of Benadryl prior to the infusion. I continue to have lymphedema of my right arm and chest area. Most recently I developed neuropathy in my feet, leaving my toes completely numb.

Throughout the infusions, I have continued to train for triathlons. I have intentions of racing again this summer. I plan to do the distance races (three sprint, one Olympic and one IRONMAN 70.3), which I was unable to accomplish in previous years due to cancer treatments. At this point in my life, I have come to the conclusion that if I want to do something I just do it. That is why I continue to do triathlons, will continue to volunteer with TBBCF, and overall keep smiling!