A Curve Ball thrown into My 2017 Triathlon Season!
“I TRI because I Can” 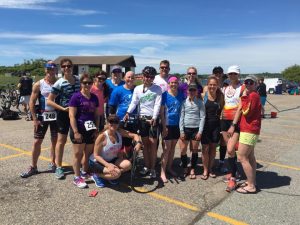 Each year I start the season with the same race, the Mystic YMCA Sprint Triathlon, which consists of a half-mile swim, 15-mile bike and a 5k run. The race was held on Sunday June 4, 2017. This was perfect timing because the Friday before was my week off from chemotherapy; therefore, I knew I had a good chance of feeling well enough to race with my teammates.

What I hadn’t factored in was the intense anxiety and depression I was feeling from my health status. On May 26, 2017, while at my doctor appointment with Dr. Silber, I told her of a new lump I could feel on my chest wall. That same day, she did an ultrasound and a mammogram, which showed that the area needed to be biopsied. She went through the procedure with me, and gave me the next available appointment for an ultrasound guided needle biopsy. The appointment was scheduled for Monday June 5, the day after the triathlon….a curve ball thrown into my triathlon plans.

Mentally, I was not prepared to do the Mystic YMCA triathlon. The Friday before the race, I talked to my primary care physician about the added anxiety, and he doubled the dose of my current prescription. This was great for the anxiety, but it knocked me out from Friday evening through Sunday morning. I still had to make a decision if I was going to do this race or not. After weighing all the pros and cons, I decided that it would be best for me to race. I didn’t want a fellow tri-athlete to stay behind with me; I wanted everyone to race hard and fast. 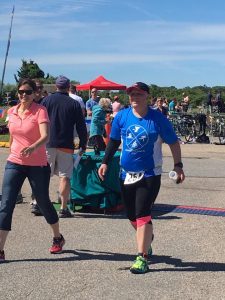 Just before the race started with the swim, I stood on the shore of the starting line looking out at the buoys, I thought, “Those look quite far away”. I started to doubt not only my mental preparedness to do this race but my physical as well. “Had I trained enough to complete this race?” The simple answer was “No not at all!”. I hadn’t even done one brick training session (two events during a training session). Then just like that the race began, and there I was, swimming along with the athletes. I was doing well, and could see my teammate, Monika, racing by my side. We came out of the water at the same time, both with big smiles.

I transitioned into the bike ride and was still wondering if I could complete this race. I knew the bike course was difficult with some hills that I dreaded. Still, I put my helmet on and took off…tackling hill after hill, being passed by many cyclists, yet keeping a steady pace. About half way through the bike ride, I saw my friends Polly and Marie. They were not racing today, but came out on their bikes to encourage all of the “We TRI 4 Aimee” team. Their positivity and encouragement was much needed at this point in the ride. My legs were starting to feel like jelly, and the negative thoughts were occupying my mind. On the last uphill, Marie and Polly both reminded me that I am strong. They repeated it with me to the top of that hill, and then I was on the home stretch.

I rolled back into transition for the 5k run. Just as I was tying my shoe, my friend Kathleen asked if I wanted her to run with me. Kathleen had been volunteering at the race and was wearing jeans. I politely replied, “If you want to but I will be okay by myself.” She started running with Polly and me. As we were coming out of the parking lot, my 8-year-old nephew, Ryan, exclaimed that he wanted to run with me as well. I had never run with my nephew, but I was confident that he would do fine because I knew myself that I was going to be walking most of it. My friend Mary was volunteering at the turn around point, and without hesitation she sprung into action and started running with us.

As I was heading for the finish line, I was humbled to see all of my teammates cheering me on. The fact that they waited for me to finish after the awards were already given and the crowds had all gone home was genuinely what team means to me. Just like that I had finished my first triathlon of the 2017 season. No matter what curve balls were thrown, I was proud to know that I raced today, because I could.