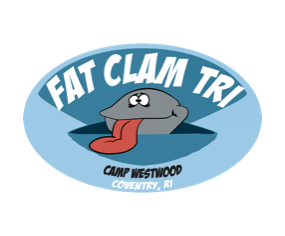 This was the third year that Tri-Mom Productions LTD put on the Fat Clam Triathlon. The race takes place at a YMCA camp in Coventry Rhode Island. It starts with a quarter mile open water swim, followed by a 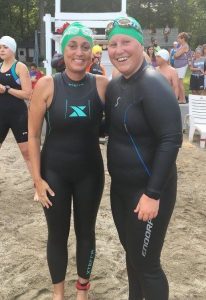 12-mile bike up and down multiple steep hills, and a flat as a pancake three-mile run.

If you had asked me just a few weeks ago if I would be participating in the Fat Clam Triathlon this year I would have told you that after my experience last year on this course that I would never do this race again. 2016 I was determined to race regardless of how I felt or what the weather was. As it turned out, last year, a week before the race I had been struggling with allergies, asthma and what I later learned was bronchitis. The day of the race it was hot, humid, and the air was as thick as could be. There was nothing stopping me from doing that race, but what I can tell you is that I was miserable that day. I went out strong in the swim, but the bike course challenged every bit of me. I found myself walking my bike up the hills, crying, hyperventilating, and feeling like I just wanted to stop. As I came into the transition off the bike, my coach Polly and friend Terry quickly came to my aid and calmed me do

wn enough to get out on the run. Terry stayed by my side the entire 3 miles as I walked the rest of the race. I vowed that day that I would never do that race again.

Then as June 22, 2017 came closer and closer, I started to rethink this race. It was my friend Milly that sparked the idea by asking me to go to a training clinic with the founder, Kathy Robbins, of Tri-Mom Productions. The training clinic took place on the race route for the Fat Clam. I agreed to go to the clinic where we did the swim and bike of the Fat Clam race route. I was pleasantly surprised that after having done the quarter mile open water swim and the 12-mile bike that I felt strong and energized. Milly and I attended the next clinic the following week and that was w 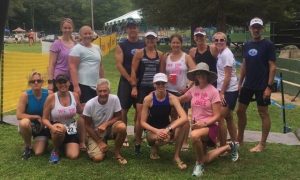 hen I decided that I felt confident in myself to be able to do the race. A few days before the race I registered, and Milly and I went the day before the race to pick up our packets and get another glance at the route.

This was it, race day was amongst us and I was as ready to race as ever. I arrived early and organized my gear at my transition. I was calm, well rested, and ready to go. The We TRI 4 Aimee team gathered on the beach where the race would start. As we cheered on fellow athletes in the groups before mine, I heard a familiar voice from behind me; there standing on the hill was Terry! I was so surpr ised to see her at the race. She had sent me a text the night before wishing me luck at the race, so I assumed she wasn’t coming. There she stood with her token floppy hat and camera in hand. I knew instantly how proud she was of me for overcoming my fear of this race.

Kathy gave us a last minute pep talk before sounding the horn signaling the start of the race. Typically, I would run into the water and make a splashing entrance, but something was different today, today I walked and smoothly glided into the water. I was so calm about this race, but why? There was no pre-race jitters or anxiety at all. As I finished the swim, I came out of the water again walking, where I would typically be running. Why was I so relaxed? I headed out on the bike, controlled and steady. I kept an eye on my odometer and speed so that I wouldn’t push myself too hard at the beginning knowing that there was some tough uphill’s coming that I would need all my energy for. After climbing the 2-mile uphill trek I stopped and stretched my legs for a second and grabbed some water. I knew from doing the clinics that this essential for me to do so that I wouldn’t cramp up. Before I knew it I was making the final turn back to the camp, waved to Terry on the sideline and just like that the bike was over. This wasn’t possible; I didn’t feel winded, panicked, or distressed. I hung my bike back up with my gear, switched into my running shoes and headed out for the run. 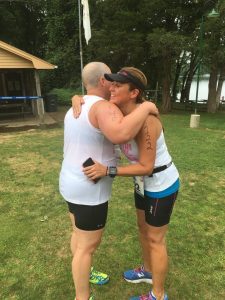 Terry joined me on the run, this time sporting her bright pink visor and running shoes. We walked for a short while and when I realized that I still had some energy left in me, we jogged. Then I would need to walk a little more but the whole time Terry stayed by my side. This year’s conversation was a bit more upbeat than last year when I was in tears. All in all I probably walked half and jogged half of the run route. As I crossed the finish line I was quickly greeted by Milly. We both talked about how much better we felt this year as compared to the last time we each did this race. The next day I researched my time from 2016, quickly looking back and forth between 2016 and 2017 results, somehow my mind had mixed the numbers up and I thought that I was 19 minutes slower this year than last. More than a week later (July 31, 2017) I went back and checked my results again, I needed to figure out how I gained 19 minutes. It was then that I realized that my time in 2016 was 2:20 not 2:02 and that this year I was actually three minutes and five seconds faster, with a time of 2:16:55. Now it all made sense, I felt so much better and stronger this year. I really thought about this race and came to the conclusion that I was not competing against anyone other than myself this year. I wasn’t overcome by emotions if someone passed me. I didn’t care who was in front of me or behind me. I was only out there to complete the course and feel better about myself. In the end I would say I accomplished my goal of doing this race and knowing that if I wanted to do it again that I could. It was never about my time, it was only ever about finishing with confidence.