The thing about Aimee Reed, the thing that everyone says about her, is that she never gave up – ever. And, oh, that smile. 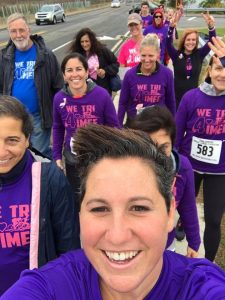 “Her mantra was keep climbing, keep swimming, keep smiling, keep going,” said Sandy Maniscalco, co-founder of the Terri Brodeur Breast Cancer Foundation, who met Aimee after she was diagnosed in 2015 with an aggressive form of breast cancer. “She was the most courageous and determined person I have seen in a long time.”

This feisty young woman – who completed triathlons after her diagnosis, volunteered for TBBCF, wrote a blog about her journey, walked in the annual TBBCF marathon, raised thousands of dollars for cancer research and faced all of life’s difficulties with grit and determination, lost her 3½ year battle with cancer Aug. 29. She was 34.

“Aimee inspired us and made us want to be better people,” Maniscalco said,” we are all mourning her loss right now.”

Aimee, a 2001 graduate of Stonington High School, earned a bachelor’s degree in physical education in 2006 from Rhode Island College, and a master’s in special education from Southern Connecticut State University. She worked as a client caregiver in Niantic when she was diagnosed in 2015 with a rare form of breast cancer. From that day forward, she committed herself to beating cancer. Along the way she became an inspiration to many.

“Being around Aimee just made you feel good. She had this air about her, a magnetism,” said Kate Davis, operations director at TBBCF. “She had crazy energy and it was contagious.”

Aimee had a legion of supporters, from her family and friends to coworkers and those she just met. She understood the need for research and the important mission of TBBCF. One hundred percent of fundraising dollars goes directly to grants for clinical research.

When she participated in her first TBBCF Walk Across Southeastern Connecticut, she had a loyal following who dubbed themselves “We TRI 4 Aimee.” Her walk team raised more than $25,000 in two years. And Aimee herself, raised more than $8,000.

In the blog she wrote for TBBCF, Aimee chronicled her journey through the ups and downs of her treatment. She shared pictures of her family and friends and her varying hairstyles, and was always hopeful that a cure was just around the corner.

“Her smile. Honest to God, her smile,” said Ellen Swercewski, a longtime volunteer at TBBCF and a member of the board of directors, who worked occasionally with Aimee in the TBBCF offices in New London, “Aimee had a great sense of humor and despite the pain she was in, we always laughed.”

When Swercewski learned that Aimee had competed in triathlons, despite facing cancer treatments she was inspired. People who commented on Aimee’s musings also were inspired.

“She was honest about what she was going through. I think she influenced a lot of people,” Swercewski said. “She plowed through.”

She was determined to live her life and not let cancer stop her. Her long-range goal was to beat cancer. She participated in clinical trials but nothing could stop the spread of the disease. She knew her time was running out but she was one of the first to sign up for TBBCF’s 2018 Walk Across Southeastern Connecticut.

“She never gave up,” said Maniscalco, who was one of many, including family and friends, who drove Aimee to Yale Smilow Cancer Center appointments and was there for moral support when she needed it. “She was always smiling and always looking for how to put a positive spin on things.”

Maniscalco was with Aimee in the summer of 2016 when she learned her cancer had come back. Aimee was finished with her regular treatments and she thought she was on the road to recovery when she got a call from her doctor. There was nothing the local oncologist could do. Her next option was to find a clinical trial she could participate in.

“She was so composed,” Maniscalco said after Aimee took the call, but later walking out to the car, she broke down. Her goal that year was to do six triathlons. She completed seven.

“It’s like a light went out,” said Maniscalco. “When you hear the news, you say, what? How did this happen?”

Maniscalco, who volunteers for the annual walk and last participated in the actual 26.2-mile walk in 2010, decided this year, at age 76, to walk again.

“It’s because of Aimee,” she said. “I owe her. She showed me what real courage looks like.”

To see pictures of Aimee and read her blog, go to Aimee’s Blog. Her family has requested donations in her honor go to TBBCF, P.O. Box 785, New London, CT. www.tbbcf.org