‘She inspired us all’ 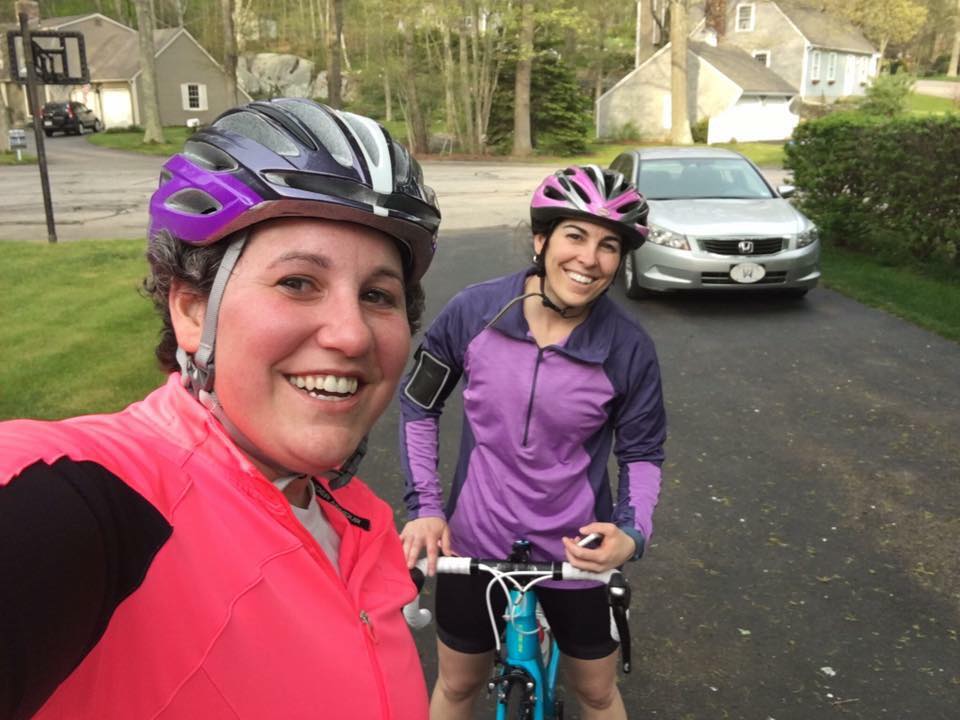 Stonington — On the last leg of a half-Ironman triathlon last year, an ambulance drove by and checked on Aimee Reed. According to fellow triathlete Terry Hiltz, Reed told the ambulance crew to move along.

“She said, ‘Get away from me. You are not picking me up, and you have some nerve thinking I need help,'” recalled Hiltz, who had met Reed at a spinning class years before. Friends, family and supporters then applauded as Reed — who completed a handful of mini-triathlons last year despite undergoing treatment for breast cancer — crossed the finish line at Narragansett Town Beach.

“It was a very moving moment,” Hiltz said on Thursday, noting there is “nothing ‘half’ about a half-Ironman” — a 1.2-mile swim, 56-mile bike ride and 13.1-mile run — and saying Reed has long inspired a group of triathletes in the region. “When we complain and whine, we think about Aimee, who through chemotherapy treatments was still doing workouts and triathlons … with a big old smile on her face.”

A longtime Pawcatuck athlete who studied education and worked as a client caregiver before being diagnosed in 2015, Reed died Wednesday in Westerly. She was 34.

Reed graduated from Stonington High School in 2001 and went on to play softball and earn a degree in physical education at Rhode Island College. She received a master’s degree in special education from Southern Connecticut State University, according to an obituary published Thursday.

Several friends and coworkers on Thursday described Reed as a tenacious fighter and selfless companion who, within the last several days, still was smiling, cracking jokes and giving others hope.

“A week ago she was still fighting,” said Michele Gardner, a breast cancer survivor who befriended Reed when they worked together years ago at the Ocean Community YMCA in Westerly. “When I said goodbye to her, you could see the fire in her eyes.”

Gardner, one of several friends who rotated driving Reed to Yale New Haven Hospital for treatments, said the pair shared a “morbid sense of humor” that helped connect them.

“I had a couple setbacks, and every time I reached out to her … she would put everything aside, and was more worried about how you were doing,” Gardner said.

Polly Chorlton, the former health and wellness director of Ocean Community YMCA, said she thought Reed was “too overqualified” when Reed applied for a job there after graduate school. But Reed turned into one of Chorlton’s best employees, helping and teaching whenever possible, forming a triathlon team with coworkers and “always with a big smile. She never lost that spirit.”

After Reed’s diagnosis in 2015, her family established a GoFundMe page and friends started the We TRI 4 Aimee group, raising funds for Reed and research for breast cancer.

Sandy Maniscalco, a co-founder and development and outreach director of the Terri Brodeur Breast Cancer Foundation — which funnels 100 percent of its fundraising to cancer research — said Reed “spent a year going through traditional surgery, chemo and radiation.”

“At the beginning of 2016 she dusted herself off … and said, ‘This year I am through with treatment and I want to do an Ironman,'” Maniscalco said, noting Reed also signed up for the Terri Brodeur Walk Across Southeastern Connecticut.

But Reed received word she had stage 4 metastatic breast cancer in August 2016. She underwent multiple clinical trials at Yale, with Maniscalco saying the cancer eventually had spread to Reed’s lungs and caused significant breathing problems.

Maniscalco and others said one of Reed’s mantras was “Keep swimming.”

“She could take the worst situation and sit back, reflect and turn it into something positive,” Maniscalco said. “She’s the most courageous and determined person I’ve known in a long time. She inspired us all.”

“I didn’t want to do the races without her,” Hiltz said, noting she was 18 years older than Reed. “But she said, ‘You have to do it.’ I would go with her to chemo treatments and I’d tell her about my training. She’d sit on the edge of her seat like it was a movie. She was rooting for me.”

This year’s Walk Across Southeastern Connecticut is set for Saturday, Oct. 6. b.kail@theday.com