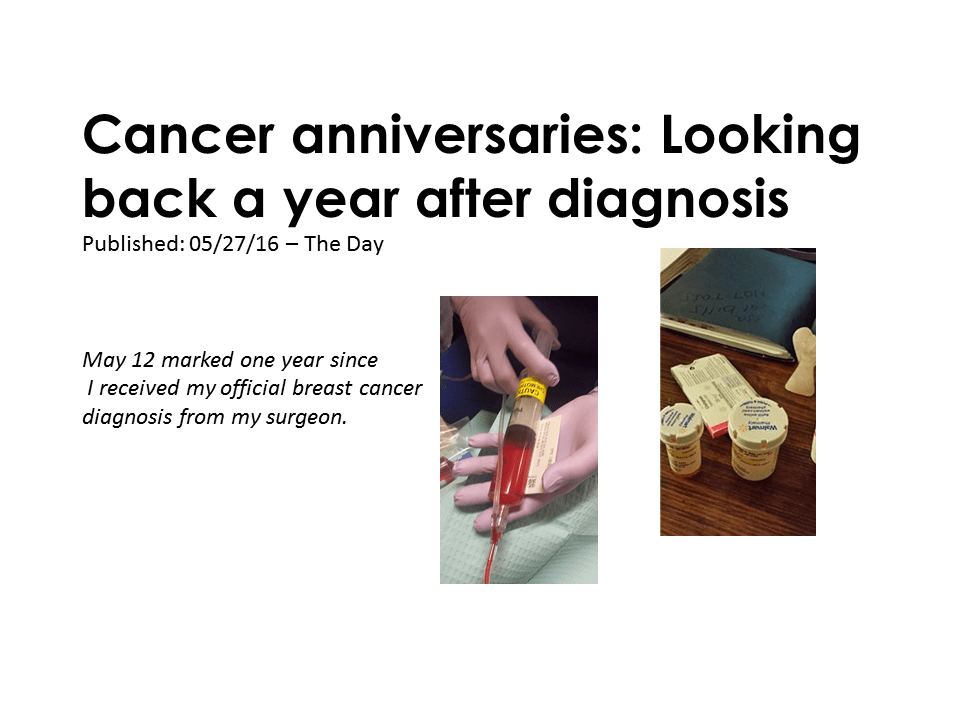 Cancer anniversaries
Looking back a year after diagnosis

May 12 marked one year since I received my official breast cancer diagnosis from my surgeon. The relief of banging the gong after my final radiation treatment last winter has faded into the grind of everyday life. But as certain dates circle around again, unwelcome memories arrive with them.

I have dozens of anniversaries now. On April 28 of last year, I walked out of Lawrence + Memorial Hospital in a daze after the doctor checked my mammogram and ultrasound and said those three fateful words: “It looks suspicious.” May 12 was D-Day, diagnosis day. June 3 will mark a year since the first drop of chemo entered my veins. And it goes on. As summer returns, I find myself having visceral reactions to everything from the heat of the air to the distinct smell of my apartment in warm weather. Everything’s reminding me of all the ways I was sick last year at this time.

I had a follow-up appointment with my surgeon last week. It was the first time I’d seen her since I had my drain removed in November after my lumpectomy. Acutely aware of my diagnosis anniversary, I’d had to tamp down some anxiety at being in the room, almost the same room in which she had explained I had cancer a year earlier.

Honestly, though, the weigh-in was the scariest part of last week’s visit. The number was higher than I’d ever seen it or imagined it would go. After I left, I found myself eating some comfort food from the Golden Arches, as if to reinforce why that number had climbed.

You’d think someone who endured a health crisis like mine would morph into the healthiest person on Earth. A raw, vegan diet.  Green smoothies. A water bottle attached to my hip. Yoga. Five days a week at the gym. Three-mile runs. Meditation.

Those hallmarks of health all appeal to me, they really do, and I’m learning I have other issues, both health-related and emotional, to address before I can say I’m really out of the woods. I may never know why I got cancer at 31, but if it ever comes back, I want to be able to say I did everything I could to keep it away.

My father recently changed his lifestyle to less sugar and salt, and more water and walking. He asked me the other day how I was doing with my own nascent health overhaul, and he said, “Don’t give that cancer a fighting chance.”

I won’t, Dad. Let’s finish getting healthy together. We can mark the days we feel great, instead of the days we were sick.