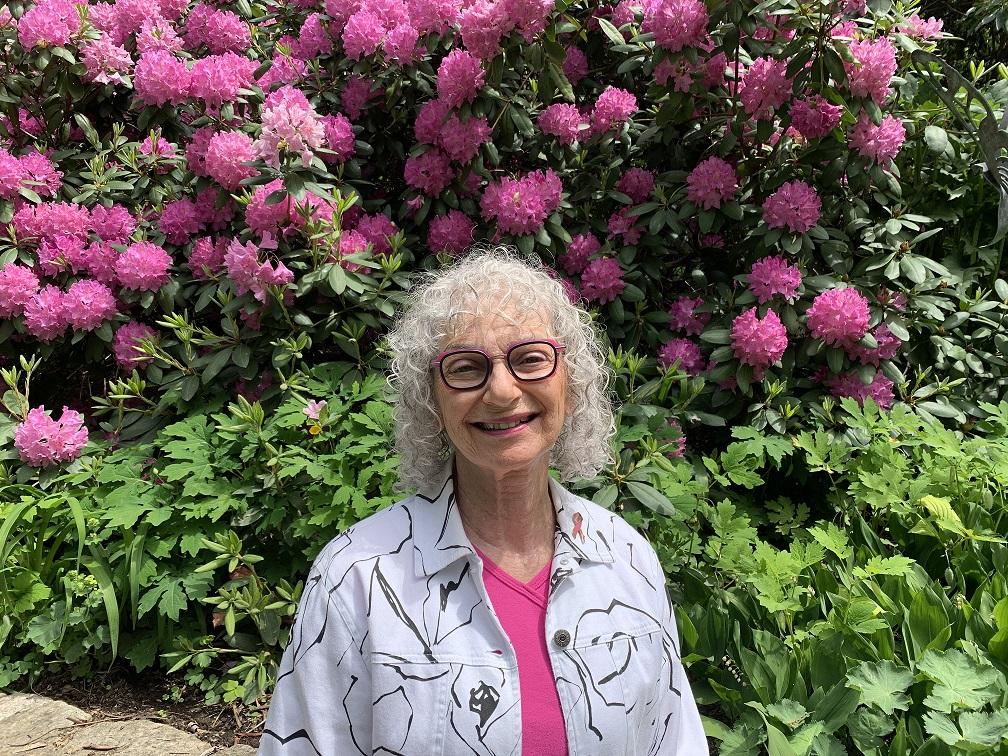 Marcie Brensilver, a founding member of the Terri Brodeur Foundation and a breast cancer survivor, is the honorary chair for the 2021 TBF Walk to Find a Cure. Every year she is the top individual fundraiser for the foundation.

Marcie, a retired nurse and sexuality educator, has participated in all of the foundation’s walks for the past 15 years. She has raised thousands of dollars with every penny going directly to researchers looking for a cure for breast cancer. To date, she’s collected and contributed nearly $200,000 to TBF.

“My ultimate goal is for one of our researchers to put us out of business,” she said during an interview at her Stonington home, where pink rhododendrons were in full bloom, matching her pink shirt and her pink rimmed glasses.

Every year she sends out about 80 letters to “everybody I’ve ever known or loved,” she said, asking for donations. Her supporters always come through.

She will speak at closing ceremonies Oct. 2, 2021, at Harkness Memorial State Park.

She said she is happy to be chosen honorary chair and will help the foundation in any way she can.

“I was surprised and happy,” she said of the honor. “It’s lovely.”

Marcie did not know Norma Logan or Sandy Maniscalco, the founders of TBF, when Sandy called her 16 years ago and asked her to participate in a three-day walk from New Hampshire to Massachusetts in honor of Norma, who was battling breast cancer. Sandy knew her husband, Dr. Howie Brensilver, and had seen an image of Marcie on a poster of breast cancer survivors promoting early detection.

Although when she answered the call, Marcie had just fallen down a flight of stairs and was nursing her ankle and back, she said yes. She trained locally with a team of walkers and support volunteers, mostly Norma and Sandy’s coworkers from Pfizer Inc. She did not know any of them. Norma showed up at one of the training sessions in Mystic and walked around the group hugging all her friends.

“When she got to me I got the same hug and kiss as everyone else,” Marcie recalled. “I knew right then, I’d do anything for her.”

The group completed the New Hampshire to Massachusetts fundraiser, but when Norma discovered that about 40 percent of what they raised went to administrative costs, she set out to start a new kind of non-profit with 100 percent of fundraising dollars going to doctors and scientists doing breast cancer research. The foundation is run mostly with volunteers and donations from sponsors.

In January 2006, the Brensilvers were among a group of professionals Norma and Sandy invited to Norma’s house to pitch the idea for the new foundation. Everyone in the living room agreed to help, she said. Howie Brensilver is also a founding board member. They named the new group after Terri Brodeur, a young mother from Old Saybrook who was diagnosed with breast cancer. Terri died in 2005 and Norma died in 2006.

Marcie said she’s made lifelong friends through the foundation and has had some very poignant moments. She got to know Terri Brodeur’s children and the extended Brodeur family.

On the first walk, the foundation broke its own rule and allowed 8-year-old Sean Brodeur to walk the 26.2 miles to honor his mother, along with Terri’s sister, Michelle Sottile-Hoyt. They came in last accompanied by Marcie, who was the Walk Caboose. But those who’d completed the walk, lined up on either side of the road into Harkness Memorial State Park, clapping and cheering them on. It was a very emotional moment.

“They’d waited for Michelle and Sean to arrive,” Marcie said, who still gets teary recalling the day. “It was so sweet.”

Marcie said she will continue to support the foundation as long as there is a need. The scientists who receive grants from the Terri Brodeur Foundation are usually starting out in their careers, studying cutting-edge treatments, trying to find a cure and need the funding.

But what she really wants is for the scientists to find a cure and put the Foundation  out of business”!