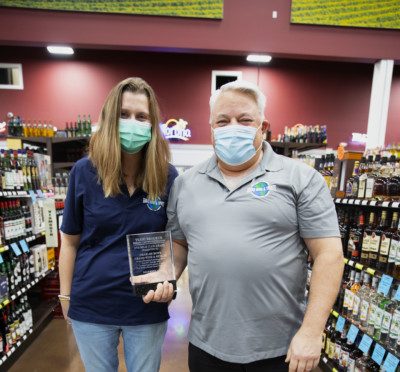 Chuck Bowe and his crew of workers and corporate sponsors at Grand Wine and Spirits have been donating to the Terri Brodeur Breast Cancer Foundation for 10 years, raising thousands of dollars for the New London foundation that gives 100 percent of fundraising money to breast cancer research.

On Tuesday, Jan. 26, 2021, Bowe presented foundation officials with $9,419 from the 2020 pink ribbon promotion event he holds every October in his five liquor stores during breast cancer awareness month. Employees also raise money and donate each year.

And then the foundation honored Bowe for his decade of contributions and awarded him membership to the 27th Mile Club. The foundation’s largest fundraiser is a 26.2-mile walking marathon from Old Saybrook to Harkness Memorial State Park in Waterford. The 27th Mile Club was established to recognize those who routinely go above and beyond on a regular basis to help the foundation.

“This is pretty impressive,” Bowe said after TBBCF Board President Patti Burmahl surprised Bowe with the honor at the gathering at the Groton store on Route 12. “I don’t do it for this, but it means a lot to us.”

Burmahl praised Bowe for his years of dedication to TBBCF. During the first four years of the promotion, Grand Wine and Spirits raised more than $10,000. In 2016, the business donated wine, beer, soft drinks, water and a champagne toast to help celebrate the foundation’s 10th anniversary. The following year in 2017, it ran a Super Bowl raffle for a plasma TV and donated the proceeds to TBBCF and Child and Family Agency in New London. Through annual fundraisers and in-kind sponsorships over the past 10 years, Grand Wine and Spirits has raised about $70,000 for the foundation.

“You raised enough to almost fund one researcher,” said John LaMattina, a founding member of TBBCF and former board president who was at the ceremony and congratulated Bowe and his team. TBBCF awards three or four $100,000 fellowships every year to mostly young and up-and coming physicians, scientists and researchers looking to cure breast cancer and find better treatments.

Bowe said when he started the pink ribbon campaign, he was looking for a local organization that helps the community, and TBBCF was it. Breast cancer affects so many people he said, including family members of some of his employees.

“This has worked out pretty well,” he said. “We’re really happy to do this program. It helps other people, it’s a local charity. You do stuff for the community. It’s nice.”

TBBCF is a New London-based non-profit established in 2006 and is named after Terri Brodeur, a young mother of three who died in 2005 after a two-year battle with breast cancer. Donations can be made to TBBCF, P.O. Box 785, New London, CT 06320 or by visiting  https://tbbcf.redpodium.com/donation-page