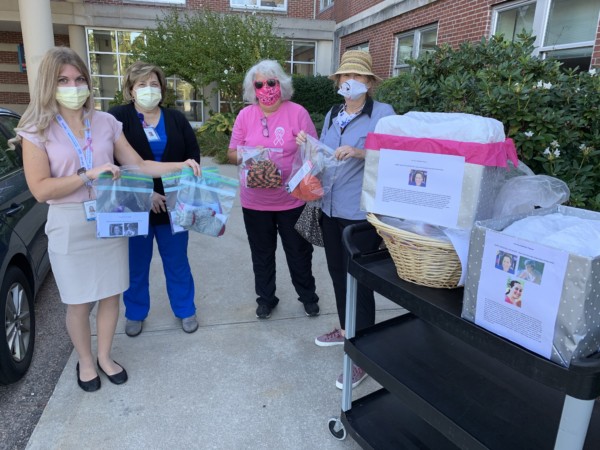 Joanne Lindeborg of Pawcatuck presented handmade knitted and crocheted chemo caps, scarves and mittens to the Smilow Cancer Center at Westerly Hospital Oct. 1, on behalf of the Terri Brodeur Breast Cancer Foundation and in memory of Aimee Reed of Pawcatuck.

“Gifts like this mean everything,” said Cheryl Murray, a social worker at Smilow who knew Reed. “Patients are often cold and this really makes a difference.”

“It’s a wonderful tribute to Aimee,” said Angela Green, an oncology nurse at Smilow who helped care for Reed. “She’s from the community and to have her memory live on like this, it’s nice to see.”

Lindeborg, who grew up with Aimee Reed’s mother, supported Aimee Reed during a 3-½ year battle with breast cancer. Aimee Reed died of metastatic breast cancer in August 2018. She was 34. Aimee’s mother, Karen Reed, was diagnosed with lung cancer while her daughter was undergoing treatment, and died two months later in October 2018.

The loss was so profound and deep that Lindeborg wanted to do something to honor the younger Reed, who she said was a positive role model and always wanted to help others. While going through treatment, Reed wrote a blog for the Brodeur Foundation website at www.TBBCF.org, and hoped that her words would inspire others going through treatment. You can read her stories at Aimee Reed’s Blog. “I think Aimee, and Karen, would be pleased, I really do,” Lindeborg said. “And I’m sure the family is pleased. This is a way to keep Aimee’s name out there.”

Reed was a tri-athlete who always cheered on her teammates, encouraging them to keep pushing themselves. She volunteered for TBBCF, raised thousands of dollars for the foundation and wrote a blog about her journey, which can be found on www.tbbcf.org.

Amy Caster, director of development and outreach at TBBCF, said she appreciates any event that raises awareness about the mission of the foundation. TBBCF gives 100 percent of its fundraising dollars directly to research and in the 15 years since its founding has awarded nearly $5 million to 48 researchers working on a cure for breast cancer and better treatment options for those with the disease.

Early in the year, Lindeborg was putting out calls to knitters and crocheters, in the hopes of collecting enough chemo caps for the cancer center to give out during October, National Breast Cancer Awareness Month. (Full disclosure, I helped with this project and knitted a few caps.) Then COVID-19 hit.

Despite most people retreating to their homes and quarantining, Lindeborg managed to collect 58 caps, 14 scarves and 16 pairs of mittens. Many people undergoing cancer treatment experience cold hands, she was told. In addition to Lindeborg (and me), other crafters that contributed were Leslie Mitchell of Pawcatuck, Kathleen Dopkin of Westerly, and Sharon McGarry of Honolulu, Hawaii. (Again, full disclosure, Sharon’s my sister-in-law and quite a crocheter)

Lindeborg said she will continue to collect hats, scarves and mittens and make more donations in the future.