From her obituary: Cynthia had a beautiful smile, a sunny radiant personality, and was loved by all who knew her. Her brave and selfless attitude inspired so many and will live on in all of those she touched. She always had hope and was the first one to give encouragement to all around her. She always thought of others and felt it was her mission to give encouragement and support to others also battling a disease. Cynthia was a fighter, loving life and living life to its fullest. 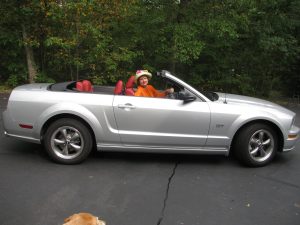 Cynthia began her cancer journey December 2004 when she was diagnosed with breast cancer. She had a lumpectomy, 40 radiation treatments, chemotherapy and Tamoxifen (hormone therapy) for 5 years. She beat that occurrence and was not diagnosed with stage IV until the spring of 2016 when it was determined that the cancer had spread to her bones.

She had no warning that the recurrence was happening. She was led to the diagnosis only after taking a fall while walking her beloved dog on a usual hike.  She broke a rib, which was very painful, but not as painful as the new cancer diagnosis. Despite this Cynthia fully pursued all of her many activities for the next 2 years and only made minor concessions to the disease such as an occasional nap.

Once diagnosed, she began therapy with Xeloda. That treatment was initially successful but was not without side effects and she tolerated that treatment for over 2 years but had to decrease her dosage due to increasing side effects.  It was then spring of 2018 when her tumor marker numbers were slowly increasing and Pet Scans showed increasing activity that another line of treatment was looked for. 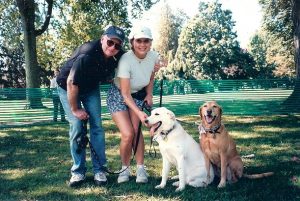 Her oncologist at Middlesex Hospital, in consultation with the Mayo Clinic, found a new promising treatment with a drug used for prostate cancer.  It was May of this year that she came off of the Xeloda and began a treatment with an anti-androgen medication that prevents testosterone from reaching cancer cells known as bicalutamide (Casodex). It was just prior to her second follow-up that the drug was stopped because of possible side effects and she was admitted to Middlesex Hospital and subsequently passed.

Having raised money for TBBCF with the annual walks across Southeastern CT, she again was signed up to walk in October 2017 but, because of the drug side effects, was unable to walk. However, in her nature, she and her husband volunteered to do traffic control, not an easy job in her condition.

She enjoyed supporting TBBCF in more ways than just the walk.  She enjoyed attending the Annual Meetings and at the last meeting she had had a “very good day”’ and attended the TBBCF annual meeting with smiles and energy.

She began her breast cancer nonprofit support with Y-Me in Branford and continued with TBBCF with the Cancer Crusher’s team and its fundraisers each September and, of course, at the annual Walks Across Southeastern.

Here are excerpts from her obituary:

Cynthia passed away suddenly on June 10, 2018 after a long battle with breast cancer. Cynthia was 65 years old. She was the beloved wife of 27 years to John Ulrich and loving sister of Joyce Zoldak of Alexandria, Va and Alan Oblon of Meriden. She also leaves behind nieces Kristin and Heather Oblon and nephew Joshua Oblon, and sister-in-law Zina Oblon and brother-in-law John Zoldak, and aunts Dorothy and Eleanor Iwanicki of Meriden. She was born in Meriden, Ct, the daughter of Ted and Irene Oblon. She married John and moved into a new home they built in Madison in 1991. She loved being a mother to her four dogs Sandy, Gretta, Daisy and Maggie. Cynthia’s positive spirit, her love of life and her wonderful sense of humor will be remembered forever.

Cynthia received degrees from Southern Conn State University, including a Master’s Degree in Counseling. She was employed by the State of Conn for 34 years in the Bureau of Disability and the Workers Compensation Commission as a Rehabilitation Coordinator; she enjoyed helping people who were injured on the job find new skills for employment. After Cynthia retired in 2012, she pursued her passions of music, tennis, and nature. She enjoyed planting flowers and shrubs in her garden and feeding the hummingbirds and other birds it attracted, and she turned her yard into a garden paradise. She loved spending time with her nieces and nephew going to concerts and participating in craft shows.

Cynthia and John shared many passions and interests. Some of Cynthia’s happiest moments were spent outdoors enjoying nature with John. You could be sure if the sun was shining or if it was snowing, Cynthia would be hiking with her dogs, cross-country skiing, at the beach or in her backyard planting.

Cynthia loved the seacoast, spending many summer vacations in Maine and much time at her sister’s Rhode Island home, and many summer days driving her Mustang convertible to the Surf Club with her boogie board. An avid tennis player, Cynthia belonged to “The Tennis Girls” League at Madison Racquet, Old Saybrook Racket and the USTA. She also was an advanced pianist who studied at Harte School of Music and New Haven Music School and performed piano recitals at venues such as the 2015 Grand Opening of the George Bray Cancer Center in Plainville. Until very recently, Cynthia had been taking tennis clinics and practicing for a performance with two pianos, something she found immense pleasure in.

She belonged to many clubs including the Garden Club of Madison, Florence Griswold Museum, Wadsworth Athenaeum, St. Lawrence Church Woman’s Prayer Group, and the Conservative Woman’s Forum. She was very religious and was a parishioner of St. Margret and St. Lawrence Catholic churches. As an active member of the Garden Club of Madison, Cynthia was naturally talented at flower arranging, winning numerous awards and blue ribbons in flower arranging competitions, including First Place in the National Garden Club Flower Show, Division II. She was a patron of the arts and loved supporting art museums and theatre, and attended musical performances and art openings at local galleries. Cynthia even had a movie debut in “Jackknife” with Robert De Niro.

Cynthia’s love of travel started with a summer backpacking trip to Europe upon college graduation, and then trips to Japan, Hong Kong, and Thailand with her grandmother and sister. John’s and Cynthia’s favorite vacation spot was Hawaii taking many trips there. She also traveled on many trips with her “Tennis Girls” to Vermont and New York City.

She was involved in fundraising for charities that benefit Breast Cancer such as Y ME and Terri Brodeur Breast Cancer Foundation. Y ME honored Cynthia for her outstanding number of donations she collected for their major fund-raising events.

She loved fashion and shopping and never missed out on a bargain and would have loved to have been a professional shopper. Cynthia shopped for all her friends and family, always bestowing thoughtful gifts on them. Another signature of Cynthia’s flair for fashion was her many colorful hats. In the summer with the top down on her Mustang, Cynthia could be seen smiling and wearing a gorgeous hat that she beautifully decorated.