Two days before my Oct. 5 Terri Brodeur Breast Cancer Foundation (TBBCF) marathon, I checked my walk fundraising page to see how I was doing. I immediately noticed a new donation from Mike and Wendy Morin with the caption, “You go girl”.

I burst into tears.

For you see, on Sep. 3, I learned that Wendy Morin, one of the foundation founding members, had passed away after a 21-month battle with glioblastoma, an aggressive form of brain cancer. I had known for several months that she was battling cancer, not from social media (Facebook) because there was really no mention of Wendy’s battle on that platform that I could see, but from a mutual friend.

When I texted that same friend to tell him about the donation to my walk fundraiser and my bursting into tears, he said, “that’s why we’ll be out there on Saturday (Oct. 5) morning”. 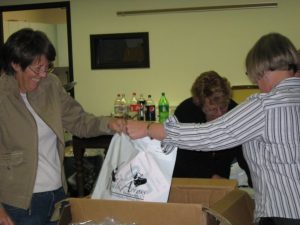 While I won’t pretend that the Morins and I have been close friends all these years, I can tell you I love those two people. I suspect there are many people who traveled through Wendy’s world who feel as I do. Wendy and I actually shared a birthday and she passed away on my wedding anniversary.

What I discovered in reading Wendy’s obituary was that she lived a life filled with community service and fellowship and that her mark on this foundation was but one of many marks she left during her amazing lifetime.

She worked for many years in not-for-profit organizations, including the YMCA where she held leadership positions in New Haven, and then as a director of professional training in the Metro YMCA of Chicago.

In her early forties, Wendy “retired” to become a full-time mom and part-time volunteer. During that period, she was the lead docent at the Florence Griswold Museum in Old Lyme, CT, and more recently she continued her focus on volunteerism at The Pettengill House Food Pantry in Salisbury, MA and at Habitat for Humanity’s Merrimack Valley ReStore in Lawrence, MA.

She was also a “proud breast cancer survivor” and supported multiple charities focused on both research and patient care including our foundation. 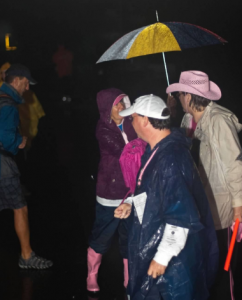 I met the Morins on Feb. 4, 2006, at the foundation launch at the home of founder, Norma Logan. The Morins, myself and my husband, Phil, and dozens of other people were there to hear Norma Logan’s promise that 100% of donation dollars raised by this grassroots group would be directed to breast cancer research. Norma died on April 20, 2006, but not before she’d made certain that this new foundation was up and running. She established the board of directors. She appointed a scientific advisory board of which Mike is a founding and sustaining member. She organized a core group of leaders to run the foundation’s signature fundraising event, a walking marathon.

Wendy’s early involvement in the foundation was to primarily support the walk day activities. From 2006 through 2008 she was a walk day volunteer while her husband, Mike, walked the full marathon from Old Saybrook to Waterford.

As each year passed, Wendy recognized a need beyond what was already being offered by wonderful teams like the cyclist team, hydration and pit stops crews, and opening and closing ceremonies teams.

Walking a marathon and raising money is difficult. Wendy could see that walkers on the road needed a little more help …  to be uplifted by cheering crowds, inspired by light-hearted and heartfelt banners and props, and to hearing lively music on the route was a way of  demonstrating to each walker how much we appreciated the sacrifice they were making.

Sometime between 2008 and 2009, Wendy invited  the then walk chairs, Ellen Swercewski and Anne Rochette, to her home so she could  pitch an idea for a new walk team. Ellen and Anne loved the idea of a spirit team and invited Wendy to join the walk leadership team as the new spirit team captain. Anne remembers, “she was so excited talking about her idea. The leadership team welcomed her with open arms.

Wendy organized her own team of spirit volunteers including her artistic friend and Waterford neighbor, Kadi Fazio. As Wendy’s husband, Mike, explained to me, “while she certainly did not like attention focused on her, she did put her whole self into everything she took on in life”. When Wendy moved out of state in 2010 she made certain there was a playbook for the new process she had created as well as identifying a successor in her friend, Kadi.

Wendy left her mark … a lasting legacy at the foundation when she established the much-needed spirit-team.

Every year when I walk through a wall of cheering students or quietly reflect on inspiring or outrageous signs along the walk route, I remember Wendy.

I have spent days pouring over Wendy’s two Facebook pages. She was way more awesome than I ever imagined. Of all that I have read, I think her daughter, Jaime, said it best.

Yesterday this strong, fierce, loving woman passed away after a tough battle with a brain tumor. Anyone who knows my Mom could see that she is a woman who stands on her own two feet and handles everything thrown her way with grace and dignity.

She leaves behind hundreds of family members (biological as well as chosen) and four legged friends who were lucky enough to feel the warmth of her laugh, the joy of her spirit, and the heart in her home cooked meals. Rest In Peace Wendy Morin. I am so fortunate to be your daughter.