On March 23, 2017, the Terri Brodeur Breast Cancer Foundation (TBBCF) lost a long-time friend and faithful volunteer, Pat Meringolo, who lost her battle with lung cancer. She was diagnosed in August, 2016.

Pat had volunteered at theTBBCF office in an administrative capacity since 2013. She supported the development campaign team during the sponorship drive and the event and promotions year-round.  She also volunteered for the TBBCF Walk each year at the Babe Ruth Pit Stop in Waterford with her Red Hat friends, serving as the Pit Stop Team Lead for the “Red Hot Stutters”. She had a great spirit and will be missed by the foundation administrative staff, as well as, the walkers and volunteers who got to see her in action at the annual walk. 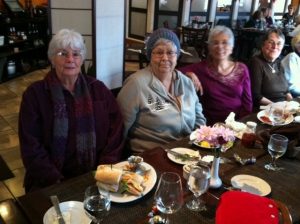 Pat, a lifelong resident of Stonington, died Thursday, March 23, 2017, after a brief illness. Born in Westerly, she was raised in the Stonington Borough, and was the daughter of the late Joseph and Margaret (Macione) Meringolo. As a child, she attended The Borough School. She was a graduate of Stonington High School Class of 1960, and she received an associate’s degree from Green Mountain College. Pat was an office manager for H.D. Randall Realtors in Westerly for many years up until her retirement in 2008.