On August 7, the Great Neck Country Club Women’s Golf Association held their 8th annual Rally for the Cure golf tournament to benefit TBBCF and raised $12,000. It was a beautiful, albeit warm day for golfing where attendance included 104 men and women golfers. In addition to their golf game, attendees were provided lunch and participated in the ever-popular raffle.

Rally for the Cure was originally founded in 2010 when the club operated as the New London Country Club. 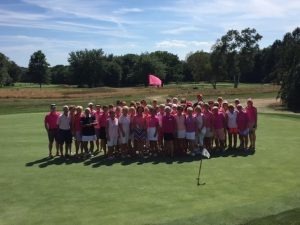 Initially, the Association ran tournaments on behalf of the Susan G. Komen Foundation. But that changed in 2010 when Dr. Michael Moran, TBBCF Scientific Advisory Board member and New Country Club member offered to help the Women’s Association with their Pink Day program. When asked about it, Mike said, “When I was invited to speak at their event, my talk was not unlike the ones I’ve given at other TBBCF events, and the work of the foundation came up as a natural extension of my presentation. TBBCF is a great story and, apparently, an easy sell.”

TBBCF picked-up where Mike left off in 2015. We have been working with the group to support them in marketing and volunteerism on the day of the event. And, of course, at the check presentation.

When asked about their fundraising success, Pat Romano was quick to provide four reasons why she feels the event is so successful. 1) The support and enthusiasm the association receives from club owners, Ann and Dave Mortimer, 2) updating the event in 2017 to include men, 3) amazing support from Keven Shea and the Pro Shop and dining staff; but 4) mostly Pat says the success is attributed to the four committee women put their souls into preparing for the event. They are Pat Romano, Cathie Patterson, Pamela Wolejko, Mary O’Reilly and Kathleen Vannini.

Since 2010, Rally for the Cure has raised over $47,000 for TBBCF. We are so very grateful to the Great Neck Country Club Women’s Association for all the hard work they put in for this tournament and their support of TBBCF.