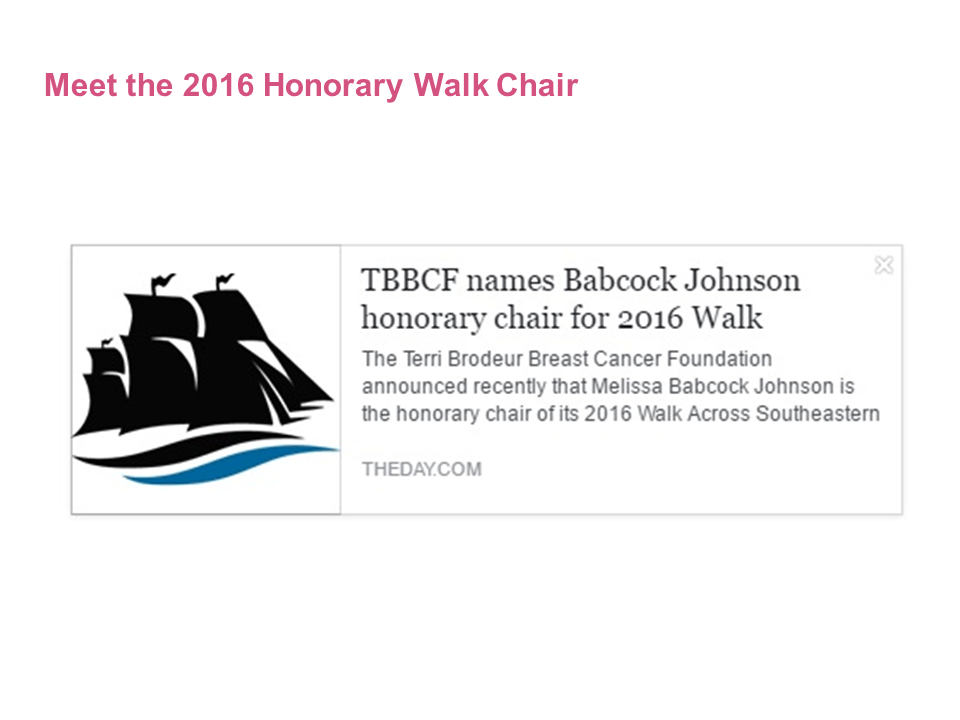 “My goal in writing my columns and accepting the position as honorary Walk Across Southeastern Connecticut chair is to remind people that your 20s and 30s are unfortunately not too young to get breast cancer, and if you notice something unusual going on with your body, get it checked out as soon as possible.~ Melissa Babcock

The Terri Brodeur Breast Cancer Foundation is pleased to announce the appointment of Melissa Babcock Johnson to the position of 2016 Honorary Chair for the Walk Across Southeastern Connecticut.

Melissa is a breast cancer survivor and an award-winning reporter for The Day. She was diagnosed with Stage II invasive ductal carcinoma — the most common type of breast cancer — in May 2015, a month before her 32nd birthday. Melissa chronicled her breast cancer journey in a series of articles for The Day over the past year.

In February, 2016, at the New England Better Newspaper Competition, the New England Newspaper & Press Association (NENPA) recognized her as one of the very best newspaper professionals. Her columns on her treatment for cancer were first in the serious columnist category. “Her tone is confiding, hopeful, vulnerable as she reveals every scary step she takes. Her conversation with the reader has a spontaneous aspect, though it is clear her writing is concisely crafted,” the judge said. “Purposeful writing that moves a reader to action. Hundreds will make an appointment for mammograms immediately. I did.” ~NENPA Judge

Over the next few weeks, TBBCF will post Melissa’s articles via its social media network. The plan is to also make public some of Melissa’s most poignant Facebook posts that we believe will be of great interest to all those affected by breast cancer: patients, survivors and loved ones.