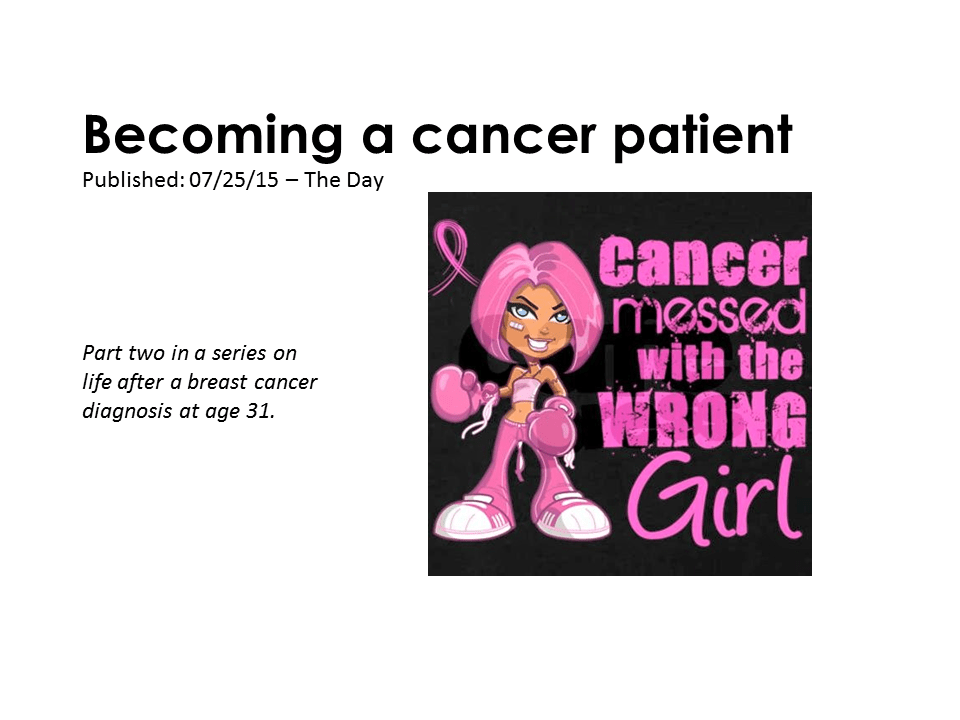 Part two in a series on life after a breast cancer diagnosis at age 31.

The weeks following my breast cancer diagnosis were a whirlwind of appointments, meetings, tests and decisions, but everyone I met was kind, brilliant and patient — united in finding out exactly what we were dealing with.

Several questions needed to be answered: Do I have a BRCA gene mutation? Yale set me up with one of its genetic counselors so I could spit in a vial and she could comb through my family tree. (Answer: no mutations out of the ones they tested for, which was at least good news for my young niece but it also meant I couldn’t blame my genes for this situation.) Do I want a double mastectomy or just a single one? (Answer: Double because I don’t want to worry about my other breast for the rest of my life. Oh, and there’s symmetry to consider.) Would I get saline implants during my reconstruction or use my own stomach tissue to craft new breasts? A Yale plastic surgeon would walk me through options. (Answer: With plenty of stomach tissue, a.k.a. fat, to spare — my words, not the tactful plastic surgeon’s — we’re not doing implants, and bonus: a flat stomach!)

Then there was this: Do I want to preserve some eggs in case chemotherapy renders me infertile and I want biological children later? Yale’s fertility clinic could help me decide that. (Answer: This was a tough one with many factors to consider. I waffled a couple of times before deciding to try my luck later or adopt if I wanted children.) My oncologist said he couldn’t promise anything, but I was young enough that there was a decent chance my fertility would return on its own. I just couldn’t face another procedure I didn’t absolutely have to undergo, and there was no guarantee that in vitro fertilization would work even after I went through everything it required. Plus, it would cost $1,500 just to store my harvested eggs for the first year and $600 for the next year.

But the most important question of all was: How advanced is the cancer? Yale scheduled some body scans. My breast surgeon didn’t think the cancer had been there long enough to have spread past my armpit’s lymph nodes (a comment I found immensely reassuring considering I was still beating myself up for waiting to get my lump checked out), but metastatic disease had to be ruled out before we could go ahead with surgery. If any rogue cancer cells had spread to my liver, lungs or bones, we were dealing with a whole different beast.

We scheduled the surgery for May 27 with the understanding that if the body scans showed any sign the cancer had spread we’d flip the plan around. Yale scheduled me for a few body scans on May 22.

Before the whole-body bone scan, I’d have radioactive dye injected into my veins that would light up on the images if they came into contact with any cancerous cells. Before the CT scan of my chest, abdomen and pelvis, I had to drink a large container of water mixed with contrast dye that would stain my insides so they’d be easier to read on the scan. This would call out any suspicious spots on my organs and allow the plastic surgeon to see where my blood vessels were and map out a plan for my reconstruction.

By the time the scans were over it was nearly 5 p.m., and I knew I wouldn’t hear anything until at least Monday. My surgery was scheduled for the following Wednesday. My father, fiancé and I left the hospital. I hadn’t been allowed to eat the entire day, so when my poor fiancé drove too slowly on the interstate on our way to Denny’s in Westbrook, where I would finally receive some blessed food, I nearly punched him.

There was nothing to do but wait — and continue to force myself not to Google breast cancer. My mother flew up from Florida to help me while I recovered from surgery. I tied up loose ends at work with an eye toward being out the entire month of June.

Another surprise announcement derailed all of our plans.

Monday was a real nail-biter during which I heard nothing. At a pre-op appointment with my oncologist on Tuesday, I learned the scans showed two small lesions on my liver and a spot on my hipbone. They could be anything — too many Spring Weekends at UConn back in the day, an unremembered old softball injury or just random degeneration. But given my current status as cancer patient, we had to assume it was metastatic disease and start chemo right away. A liver biopsy and my port placement were scheduled for June 2, and my first chemo infusion would be June 3.

Luckily, the liver biopsy came back clear a few days after I began chemo. My oncologist seemed pleased but surprised and cautioned me that there was always a chance it was a false negative. I didn’t care. I stared giddily at the words “negative for carcinoma” and relished telling my family and, of course, posting the news on Facebook, along with a few more choice words for cancer. Chemo had already begun so there was no going back, but that was OK. I had cancer, but it wasn’t Stage 4! (Oncologist disclaimer: Probably.)