Cancer a winding path of uncertainty 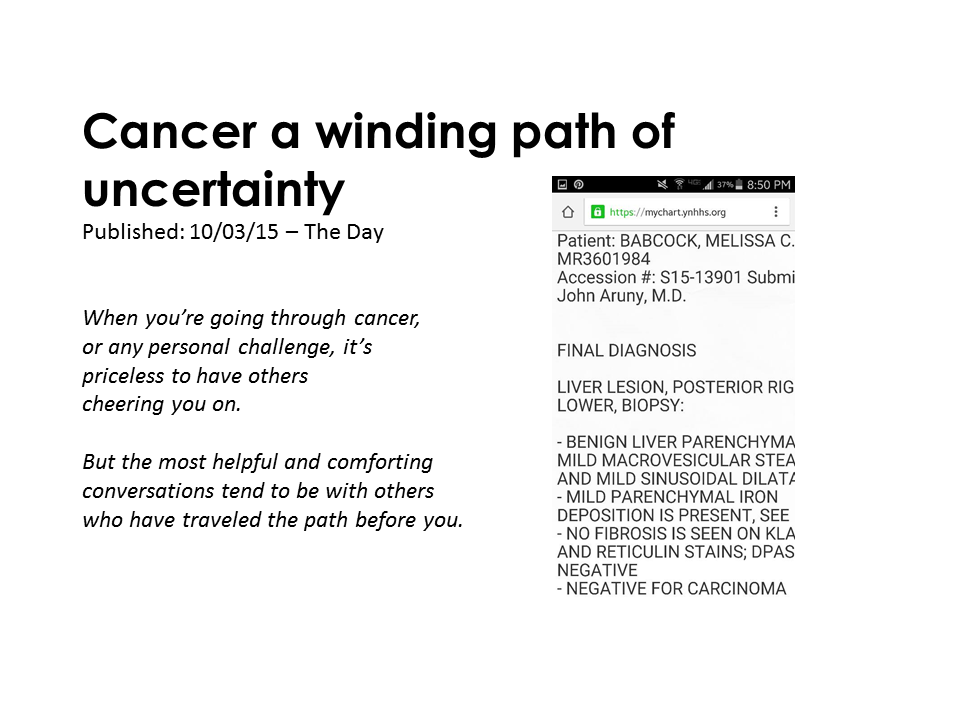 Cancer a winding path of uncertainty

Part four in a series on life after a breast cancer diagnosis at age 31.

When you’re going through cancer, or any personal challenge, it’s priceless to have others cheering you on. But the most helpful and comforting conversations tend to be with others who have traveled the path before you.

With cancer, I’ve found the path is full of twists and turns, rocky spots and places where you have to trudge uphill for a while. Just when you feel like you might not be able to go on, there comes a place on the path where you can coast for a bit and even appreciate the view.

My last chemo infusion was almost a month ago, but I’m still suffering from two common Taxol side effects: damage to my fingernail beds and peripheral neuropathy (nerve damage in my hands and feet). It’s more intense in my feet; I walk gingerly and it feels like my feet are permanently and fiercely asleep. I look like a toddler going down stairs, and I walk slowly, like a 90-year-old with arthritis. As I told my oncologist recently, though, I’d rather have neuropathy than cancer.

Shortly after chemo ended, my oncologist ordered another CT scan of my torso so he could see if the two spots on my liver discovered back in May had reacted at all to the treatment. Even though the biopsy in June had revealed no cancer, my oncologist had given me the disclaimer that it was possible the biopsy had missed. It was a strange situation — we actually hoped the spots hadn’t changed because change would indicate they had responded to the chemo and were cancer after all.

It turns out they did shrink. I got the call on the evening before my bridal shower. My blessedly optimistic oncologist started the conversation by cheerfully telling me that “everything has improved.” One liver spot had shrunk from 2 cm to 0.9 cm, and the other from 2.6 cm to 1.7 cm. He saw this as a good thing, but my heart sank as I gleaned the implications.

He stayed on the phone with me for about 15 minutes, patiently answering my questions. He was non-committal, since nothing was certain and the biopsy had been negative. (It seems, however, that we can only trust biopsies when they’re positive. Negative is just another word for inconclusive.) I asked the doctor if the shrinkage meant I was a stage 4 cancer patient. He carefully told me he does think they are cancer and the apparent response to the chemo meant we were “likely dealing with something.”

After I straight up asked him if I was going to die in the next few years, he said no and reassured me that lots of new treatments are emerging all the time and hormone-receptor-positive cancers like mine tend to do better with treatment, even in cases of metastatic disease. But the undercurrent of the conversation was that we just don’t know for sure what stage I am, a hope I was happy to cling to.

I don’t know if it was my mother being up from Florida for my bridal shower that unleashed my emotions, but I cried more the week after I learned my liver spots were still suspicious than I had when I was diagnosed with cancer back in May. My father has been my cancer buddy since he lives nearby and had it himself, and I largely deal with my cancer by making jokes and being goofy with him. That’s how we approach life (and death, apparently). But once my mom was around, I let go. I guess no matter how old you get, everyone needs their mom sometimes.

I also found comfort in the advice of a friend’s husband, who is only a few years older than I am and is going on a decade cancer-free after being treated for stage 4 testicular cancer. I sent him a message online about the spots shrinking and what my doctor said, and he replied, “Don’t get discouraged, there are always setbacks, or new things pop up. It’s all part of the process. The plan you were given on day one is not the plan you will finish with, but all that is OK in the end … Cancer changes everything, if we adapt to those changes we come out on top. I’ve been following your posts and you stay so positive, it is so important to stay that way even when it’s the last thing you want to do.” His words put things in perspective for me and pulled me out of that first real downer period.

But as for my liver, when in doubt, order another scan, and that’s what my doctor did. The following week I went in for a PET (positron emission tomography) scan, which is more sensitive than the CT scans and MRIs I’d had before. From what I understand, PET scans will show the rapid cell activity and growth indicative of cancer in a questionable spot, while CT scans and MRIs can only reveal a questionable spot, not what it’s doing.

The scan was on a Friday in New Haven. My dad came with me, we cracked jokes and made light of the situation as usual. A kind and funny nuclear radiology tech named Israel prepped me and injected me with radioactive tracer contained in a little metal cylinder, and I drank the clear, tasteless contrast dye, made more palatable by some pink lemonade flavoring Israel gave me. After letting the tracer circulate for an hour, he brought me to the PET scan machine, which sat behind closed doors with “Radioactive” stickers on them. I lay on my back and stared at the colorful butterfly stickers on the inside of the tube as it inched me through.

On Monday, Sept. 28, my path got easier for a bit. While a nurse was taking my vitals in an exam room before my appointment, my oncologist popped his head in on the way to meet with another patient and said four words: “Good result! We’ll talk.” I widened my eyes and raised my fists in a victory pose. My father laughed and high-fived me. The nurse smiled and said, “Now you can breathe.”

The PET scan showed zero activity in the questionable spots, and only lit up a bit in my right breast where we already figured there’d be lingering cancer. My oncologist was very careful in the way he explained the PET scan results, phrasing it as though the chemo had successfully treated and removed any cancer that was in the liver spots. My father and I stared at him blankly, hoping he’d finally say the spots were never cancer after all. But the fact that they responded to the chemo was pretty telling, so we couldn’t write them off yet. That’s OK, though. On this path, a little uncertainty is the least of my worries. I’m just going to enjoy the view for a while.