A celebration amid uncertainty 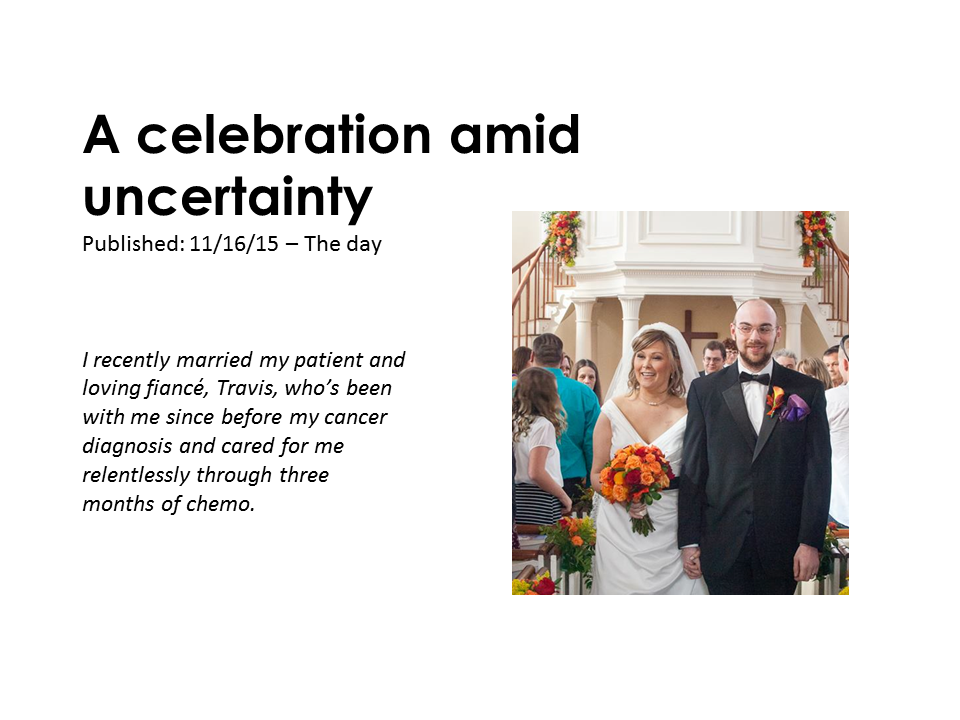 A celebration amid uncertainty

Lots of good things have happened since my last column. I married my patient and loving fiancé, Travis, who’s been with me since long before my diagnosis and cared for me relentlessly through three months of chemo. We had a brilliant autumn day, even if it was a bit chilly. As I predicted in our wedding video, Oct. 17 was indeed a celebration amid all the uncertainty.

We got married at the beautiful Congregational church in my hometown of East Haddam, which was designed by architect Lavius Fillmore and built in 1794. I wore a gorgeous $400 wig, which insurance will reimburse once I submit my sales receipt and prescription for a “cranial prosthetic.” My father gave a short speech to our 78 friends and family, which marked the only time in my life I’ve seen him cry aside from his father’s wake in 2006. My cancer buddy and I have been through a lot together these past months.

Four days after my wedding, I had a lumpectomy and my tumor was removed along with nine lymph nodes from my axilla (armpit area). Three were cancerous — fewer than I’d expected — so I was pleased. A separate “intramammary” lymph node near the tumor was found to be cancerous as well, but it was removed and all margins were clear. I had just one surgical drain versus the six to eight I’d have likely needed if I’d had a full double mastectomy. It looked like a plastic grenade hanging from a long tube that came out of my side. I had to periodically empty and measure the fluid it drew out, and once the amount stayed below 30 milliliters every 24 hours for a few days I had it removed.

I’m glad I was able to have a less grueling, invasive and body-altering surgery than I’d originally planned, but the downside is I’ll have to worry about one of my remaining milk ducts developing cancer down the road. The chance is slightly higher than average, and if I do get cancer again I’ll have to undergo the whole shebang after all — double mastectomy with reconstruction using my stomach tissue — but I’m glad to have my body mostly intact for now. Aside from the incision scar, my breast looks the same as before with no dent or visible gouge.

Just like the wedding, the surgery went very smoothly. Three weeks have passed and I feel mostly normal. The scars are minimal and there’s some numbness, which is normal but feels a bit odd. The first time I tried applying my usual stick deodorant, I couldn’t handle the strange lack of sensation on my right side and decided to buy a spray version. Once my five days a week of radiation begins for a total of six weeks, all I can do is hope it zaps any lingering cancer cells and renders me cancer-free.

Nov. 12 marked six months since my diagnosis. My hair is growing back. My appetite is back to normal, even if my energy levels aren’t. My neuropathy seems to be fading, or I’m simply getting used to it. Walking and writing by hand are still somewhat difficult, so to my embarrassment I haven’t written my thank-you cards yet. So many people deserve to be thanked, not just for the generous wedding gifts we received, but for all of their kindness since I was diagnosed in May. Life is scarier, but certainly richer than the day I felt that lump — and initially thought nothing of it — more than a year ago.

Recently a man named Peter Emshwiller released a video called “Later That Same Life” in which, through the magic of film splicing, his 18-year-old self in 1977 interviewed his 56-year-old self in 2015. Most people might watch the four-minute video and think, “Neat,” before forgetting about it an hour later, but it stuck with me. I’m only 32 and can already think of plenty of things about which I’d like to warn and reassure my 18-year-old self. Certainly no one is guaranteed a long life, but once cancer becomes part of the story the odds get smaller. Cancer, as my father’s radiation oncologist once told him, is like a bratty child that you can send away, but it’s going to pop up again if and when it feels like it.

I didn’t have the clever idea in 2001 when I was 18 to shoot footage of me asking questions of my future self, prepared to wait decades for the answers, but I hope I live to see June 13, 2039 — my 56th birthday — and, like Mr. Emshwiller, get the chance to reflect on what I’d say to my much-younger self.