It takes all kinds to help find a cure

When it comes to supporting the Terri Brodeur Breast Cancer Foundation, there are hundreds of of men and women who walk in the annual Walk Across Southeastern Connecticut and raise thousands of dollars that go directly to cancer research.

There are also many others in the  community who don’t walk but who give from the heart to help sustain the 13-year-old non-profit organization.

Two such gracious businessmen are Brian Carey from Carlin Contracting Company, Inc. and Chuck Bowe from Grand Wine and Spirits.

Grand Wine and Spirits, which has five stores in the region, has been raising money through in-store promotions since 2011. Every year from mid September through October, the stores are lit up in pink. With the purchase of some wines, beers and liquors, a donation is made to  TBBCF. Last year, the goal was to raise $8,000. They ended up donating $10,000. Grand Wine and Spirit supports TBBCF in a couple of ways. They have been a Sapphire Sponsor for the past four years.

The money donated by Grand Wine and Spirits is important because some of it is used to keep the foundation running. While all the fundraising money from the October walk goes directly to grants for breast cancer research, it is sponsor donations that allow the foundation to operate. The money helps underwrite administrative costs. 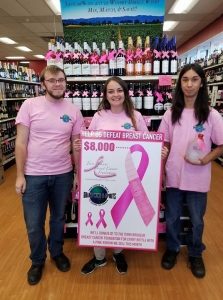 Amanda Latham, marketing and merchandising coordinator for Grand Wine and Spirits, said her boss likes to support the community. In addition to donating to TBBCF, he gives to Children & Family Agency and Work Vessels for Vets.

The nearly 100 employees of Grand Wine and Spirits also give to TBBCF. In addition to selling the alcohol, they offer bracelets at the register for a donation, and some take part part in a portion of the annual marathon.

“Donating to charities like Terri Brodeur, that gives 100 percent to research, our employees love that,” said Latham. “They feel good knowing it’s a good charity.”

This year about eight employees are walking  the quarter mile marathon on Oct. 6. They’re planning on wearing pink tutus and a team t-shirt, although they are still trying to come up with a name.

“There are a lot of personal stories here,” Latham said.

Grand Wine and Spirit shops are located in Mystic, Waterford, Old Lyme and Groton – one near Stop & Shop and the other near Big Y.

Carlin Contracting Company in Waterford is also a long-time annual sponsor to TBBCF. In fact, Carlin has been a continuous sponsor since TBBCF’s founding in 2006. Brian Carey said although no one in his family has been diagnosed with breast cancer, he knows many people who have suffered.

“And there’s always more,” he said. “Seems like it’s an ongoing need.”

Carey, who is friends with some of the original organizers of the foundation, said he likes the way the money goes to research.

“The board is very good at figuring out who to give the money to,” he said.