Hey golfers, how much would you pay for a second chance?

The Great Neck Country Club Women’s Association sells mulligans during its annual charity golf tournament, and they expect to raise a lot of money this year for the Terri Brodeur Breast Cancer Foundation during the Aug. 6 tournament at the Waterford golf course. 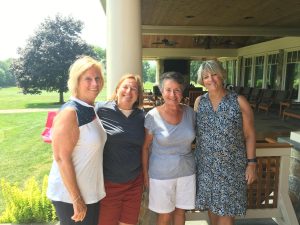 “Tell a bunch of guys they can have mulligans and they go crazy,” said Cathy Patterson of Waterford, a member of the women’s association and one of the organizers of the annual Terri Brodeur Breast Cancer Foundation Golf Tournament. “You want to raise money for a good cause? Set up outside the Pro Shop and sell mulligans.”

Mary O’Reilly, also of Waterford and a member of the organizing committee, said last year during the tournament, on the 4th fairway, a golfer came up to her and just donated $20.

“The men will be throwing money at us,” said Patterson.

Which is good for the foundation. In 2018, the golf tournament, which is open to members and guests, raised $12,000 for TBBCF. Just over $450 of that came from selling mulligans to the 100 or so golfers who participated.

In addition to a modest registration donation, the association sells commemorative tee signs in honor of loved ones, and hosts a raffle which features prizes donated by local businesses. Last year, a Red Sox fan put all his raffle tickets on a basket filled with Yankee paraphernalia, just so he could burn it all if he won. He won. But cooler heads prevailed, namely Red Sox fans, who commandeered the Red Sox loot. The committee intends to re-raffle the basket during this year’s tournament.

“It’s a great group,” said Pam Wolejko of Waterford, another member of the committee. “There’s always a lot of laughing.”

“There’s a lot of camaraderie at the club,” agreed Pat Romano of New London, who took over organizing the tournament in 2015.

This year the association is hoping to raise even more money for TBBCF.

“We keep saying over and over, 100 percent of the money you donate goes to breast cancer research,” Patterson said. “People love that.”

The tournament has been going on since before 2010 when the golf course was called the New London Country Club. The money went to the Susan B. Komen Breast Cancer Foundation. But in 2010, Mike Morin, a member of the club and a founding member of the TBBCF Scientific Advisory Board, spoke to the association about TBBCF. He explained that the New London based foundation named after a young mother of three from Old Saybrook who died from breast cancer, gives 100 percent of the money raised by groups such as this association, directly to research. TBBCF awards at least three $100,000 grants each year to young doctors and researchers looking for a cure for cancer and better ways to treat the disease. The women immediately changed their allegiance to the local foundation.

Originally the event was open to only female members and their guests. Additional money was raised by a few members setting up a table and soliciting money from the Tuesday Night Men’s League. They even sold baked goods. 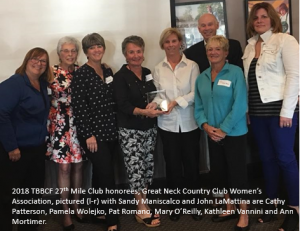 “That first year, it was like Helter Skelter. We didn’t know what we were doing,” Romano said.

In 2016, they opened the tournament to men and a limited number of outsiders and raised $7,700.

In 2017, the committee limited the event to only members and guests of the Great Neck Country Club and raised $10,700.

In 2018, with just over 100 registered golfers, the auxiliary raised $12,000. TBBCF honored the women by designating them members of the 27th Mile Club, a designation reserved for those who go above and beyond in their efforts to raise funds or volunteer for TBBCF.

The tournament has become a community affair, the women said. Businesses donate the fairway signs, and coffee and snacks for the 8:30 tee time. The bag room boys don pink t-shirts the day of the event and the club restaurant breaks out pink cups and flags. The owners of Great Neck, the Mortimors, are very generous, the women say.

“There’s no one who hasn’t been touched by breast cancer,” Patterson said. “And when people hear 100 percent goes to research … “

The women said the day before the tournament they are exhausted and swear they will never again organize it. The committee also includes Kathie Vannini of Niantic. Then, on the day of the tournament, they enjoy themselves and are in awe of everyone’s eagerness to donate to fund cancer research.

“The rounds of golf take longer on the day of the tournament,” Patterson said. “But members and guests say it’s worth it.”