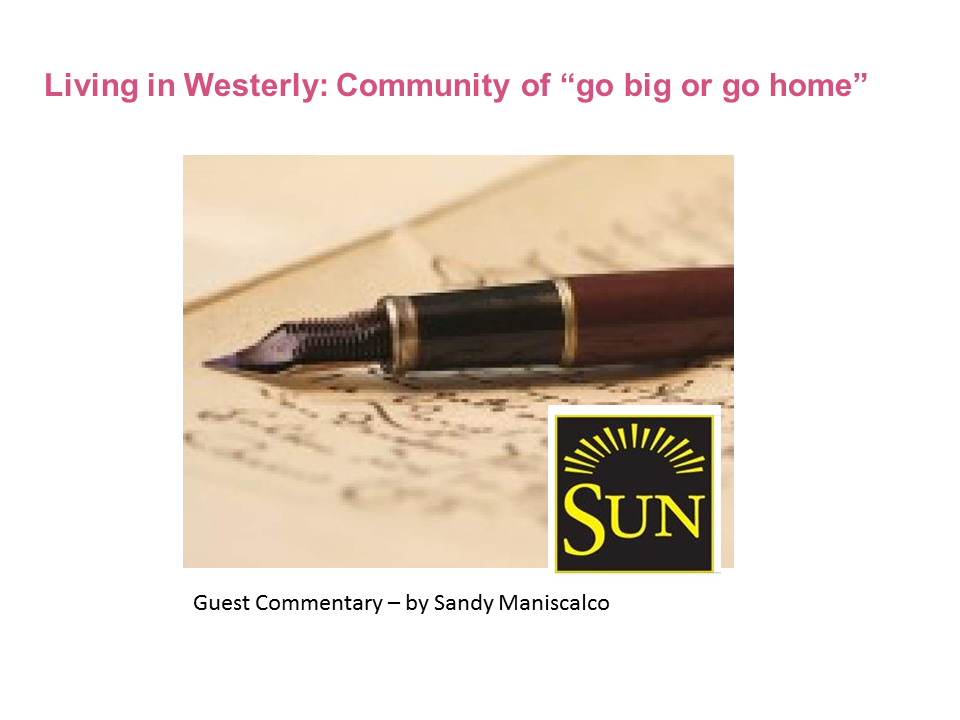 I was raised in Stonington Borough and graduated from Stonington High School in 1960. Growing up in the borough in the ’50s was wonderful. I especially love my memories of the borough kids and the community center. I spent most of my adult life living in Mystic. My husband, Phil, and I and our large blended family enjoyed our home near Mystic Seaport for 35 years. Living in Mystic was an equally wonderful experience mostly because of the greatest neighbors in the world and running, biking or walking around the Mystic River.

I moved to Westerly in May 2012. It took me about a year to feel at home. But what I have discovered in the last four years is that Westerly cares. It cares about its community. Its residents care about wellness, especially the senior citizen community. And when Westerly latches onto something, it’s either go big or go home.

The most obvious and recent example is the energy the town invested in supporting Dorian Murray, “our brave little famous local boy” from Westerly who was battling cancer. We all got behind the #DStrong social media campaign. In January, thousands turned up at Misquamicut Beach to be photographed on the beach en masse in support of Dorian. When Dorian died in March, hundreds attended his public memorial service.

Most recently, I was blown away by an event staged in Wilcox Park. The United Theatre hosted a free public workout with P90X creator Tony Horton. Local fitness trainers organized the town around an Ocean Community Fitness United for the United Theatre team. Hundreds of us turned up for the event, which raised money for the theater through merchandise sales and a basket raffle.

I became more involved in the town when I was assigned to an outreach program team on behalf the Terri Brodeur Breast Cancer Foundation. The foundation is a local nonprofit that commits 100 percent of its gross fundraising dollars to breast cancer research. Since 2006, we have raised more than $3.4 million and funded 34 research grants.

The chamber helped introduce the Terri Brodeur Breast Cancer Foundation to the town through a breast cancer awareness event that they helped us organize at the Granite Theatre. Community service superstar Julie Holland, of Pawcatuck, also hosted the second annual Pink Ladies Night at the Twisted Vine.

In October 2014 and 2015, the Westerly-Pawcatuck Downtown Business Association joined forces with the foundation and ran a monthlong breast cancer awareness promotion, PINKtober. Business leaders Colin Bennett, Leo Roche, Mia Byrnes, Julie Holland, and Tim Babcock from the Ocean Community YMCA were among the business folks who spearheaded the campaign, helping to raise thousands of dollars for the foundation.

This year, in addition to continuing the downtown breast cancer awareness campaign, the foundation’s goal is to build a walk team of Westerly and Pawcatuck residents. Our inspiration is Pawcatuck resident Aimee Reed. Aimee, a breast cancer patient/survivor, has been named the fourth annual Westerly Breast Cancer Awareness Month honoree. The hope is to recruit at least 30 walkers. But knowing Westerly’s “go big or go home” philosophy, there is the potential for this to grow into something really big! The Terri Brodeur Breast Cancer Foundation will be at Donahue Park on Saturday for River Glow. We will also host an event in September to introduce Aimee as the breast cancer awareness honoree. Come meet us and show that Westerly spirit!

The writer is the co-founder and development director of the Terri Brodeur Breast Cancer Foundation and the 2014 Athena Award Recipient.