For the love of the game and cancer research 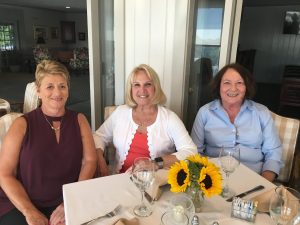 Charlene Amacher, Ronnie Levine and Cathy Burnett have mothers, daughters and friends who have faced a cancer diagnosis. It is the reason they organize and promote the annual golf tournament, solicit donations from businesses and prod their friends into signing up. It is the reason they pledge all of their donations to TBBCF, where 100 percent of gross fundraising dollars goes directly to research. And it’s why this year they are opening up the tournament and inviting the male members of the club to participate. They hope to surpass last year’s donation of nearly $6,000.

“Everyone has been touched,” said Burnett.

Burnett’s daughter was diagnosed with breast cancer in 2004 at the age of 37. Now, 14 years later, her daughter is cancer free and is a wife, a mother and a friend.

“There is life after breast cancer,” Burnett said. “The prerequisite is early detection, early treatment and research funding.”

But it is her friend’s story, without a happy ending, that still brings Burnett to tears and keeps her motivated to raise money for research.

Burnett and her friend, both nurses, were neighbors in Rhode Island with seven children between them. They carted each other’s kids around to movies, the PTA and swim club. While her friend was battling uterine cancer in 1999, she asked Burnett to play golf with her. Burnett said she was an excellent tennis player but had never before played golf. She took a few lessons.

The two friends went out on a par-3 course called Firefly and started hitting balls. They quit after six holes but laughed all the way through. They played together once a week through the spring and early summer – never talking about cancer but having a grand old time on the course congratulating themselves for “not being so bad” and “not being the worst team.”

“We had the best time,” Burnett said. “We were so funny.”

When her friend called one day to tell her she wasn’t strong enough to play any longer, she confessed that for months, the only time she got out of bed was to play golf. Her friend died in 2000, and Burnett tossed golf balls into her grave and figured she would never play again.

But life had other plans for Burnett. After her husband of 40 years died from an occipital lobe glioma, a type of brain tumor, Burnett remarried in 2014, and the newlyweds moved to Old Lyme where she joined the country club.

“I came out here and I didn’t know a soul,” she said. “I hit my first golf ball over the clubhouse.”

She also learned about the annual fundraiser for TBBCF.

“The fact that my daughter is a survivor is a gift,” she said. “We need all the money to go to research. Every little bit they learn brings us closer and closer to a cure.”

Burnett stayed in touch with her friend’s four daughters, attending their weddings, bat mitzvahs and talking to them about their risk of getting breast cancer. Three of the four daughters tested positive for the BRCA gene mutation, and one was diagnosed with breast cancer while in the hospital after just delivering her first child. After having children, the three with the mutated gene opted for bilateral mastectomies, hysterectomies and oophorectomies. Today, all are healthy and they have 11 children between them, Burnett said.

Early detection and arming yourself with information is the key, Burnett said.

“It’s important to pound into young people’s heads to go to their mammograms and do breast self-examinations,” she said.  “Young people think it can’t happen to them. But it can.’’

This year’s golf tournament, organized by the club’s Women’s Association, is being held Thursday, July 19, at the Old Lyme Country Club, 40 McCurdy Road, Old Lyme. It is a scramble, and for the first time, it is open to men and women. Participation fee is $30 per person and is a direct contribution to TBBCF. A raffle and silent auction will take place before and during lunch.