Pink is always the color of hope and joy on the first Saturday of October since 2006 when the Terri Brodeur Foundation holds its annual walking marathon fundraiser from Old Saybrook Point to Harkness Memorial State Park in Waterford.

This year, 360 people registered to raise money for breast cancer research. About 65 completed their walk virtually, but the others, along with 164 volunteers, participated in the 16th annual TBF Walk for a Cure on Oct. 2. To date, walkers have raised over $250,000 but organizers are hoping to raise more than $300,000 by the end of year.

“It’s so good to see you all and to be seen,” said a happy Marcie Brensilver, the 2021 honorary walk chair and speaker at closing ceremonies. “I’ve missed the hugs. And I hugged all of the people who passed through the arch, even those I didn’t know.”

On a beautiful fall day those who completed a full, half or quarter marathon, or a 5K, walked through an arch of pink, white and red balloons at Harkness, many linking arms and smiling at their accomplishment. They were greeted with cheers and cowbells and the embraces of strangers and loved ones. 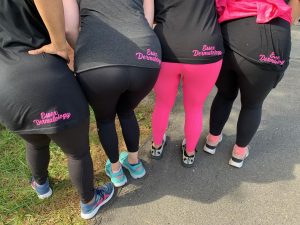 “We have our sunscreen!” they announced, pulling small tubes of sunblock from pockets and bags.

“We have the best staff,” said Dr. Ginny Maher-Wiese, who completed the half marathon with eight co-workers. “We’ve been planning this for a month. I’m so proud.”

The women rallied behind Tomasin Williams, who organized her coworkers. She said her boyfriend’s mother beat breast cancer and that inspired her to participate.

All those who walked were treated to clam chowder from Flanders Fish Market and Restaurant in Niantic, pumpkin bisque from Penny Lane Pub in Old Saybrook, a variety of snacks from Deep River Chips, and Ben & Jerry’s ice cream cups. There were also drinks, sandwich wraps, chips and candy. 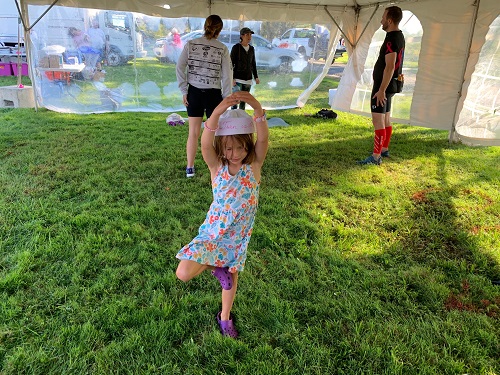 Other activities included a yoga tent, where 5-year-old Sawyer Chesebrough of Mystic, who was with her grandmother Susan Raffetto of Stonington, danced around with pink pom poms, luring walkers into the tent for a stretch.

“There’s such great energy and connectedness here today,” said Tracy Blasioli of East Lyme, who volunteered her yoga expertise. “Everyone is coming in here with great, big smiles.”

Earlier in the day, Sean Brodeur, the late Terri Brodeur’s son, kicked off the walk in Old Saybrook. Walkers passed through Old Saybrook, East Lyme, Niantic and Waterford, stopping at 11 pit stops along the way where they were offered food, drinks and encouragement from volunteers. Lunch was at Rocky Neck State Park.

John LaMattina, a founding member of the foundation, praised all walkers and volunteers during closing ceremonies and congratulated them for the more than $5 million they have raised over the years. Last year, even though there was no in-person walk because of the pandemic, die-hard supporters managed to raise enough money to fund four $100,000 grants for breast cancer research, he said.

“Some now have students who are oncologists,” he said. “We have touched thousands of patients.”

Patti Burmahl, president of the Board of Directors, also thanked the volunteers and organizers who start planning the fall walk in the spring.

“Without them, we would not be able to give100 percent to research,” she said.

She also thanked the generous sponsors who year after year have supported the foundation, including Pfizer Inc., the LaMattina family, Doherty, Beals & Banks, and Whelen Engineering Company.

Brensilver, a 30-year breast cancer survivor and a founding member of TBF, introduced her niece, Abby Hirsh Phillips, who has battled three re-occurrences of cancer and has been in stage IV breast cancer for the past 2 1/2 years.

“We all have different stories,” Brensilver said, wrapping her arms about her niece, who she called her first baby. “It’s for Abby, and those like her, that we walk.’

Brensilver has raised more than $200,000 for the foundation and was surprised at the ceremony with the first ever “Lifetime Achievement Award” from TBF. Founding member Sandy Maniscalco presented the honor.

“Marcie Brensilver epitomizes what Norma Logan envisioned,” said Maniscalco, referring to her co-founder who died of breast cancer before the first walk was held. Logan wanted an organization that would send 100 percent of fundraising dollars to breast cancer research. Money to operate the foundation would rely on the goodwill of volunteers and sponsorships. Brensilver, and many others who helped start the foundation and continue to support it, said they would have done anything to help their friend Norma.

“Marcie, we love you and thank you for all you do,” Maniscalco said, hugging her friend.

“See you next year,” Brensilver shouted out to the audience.