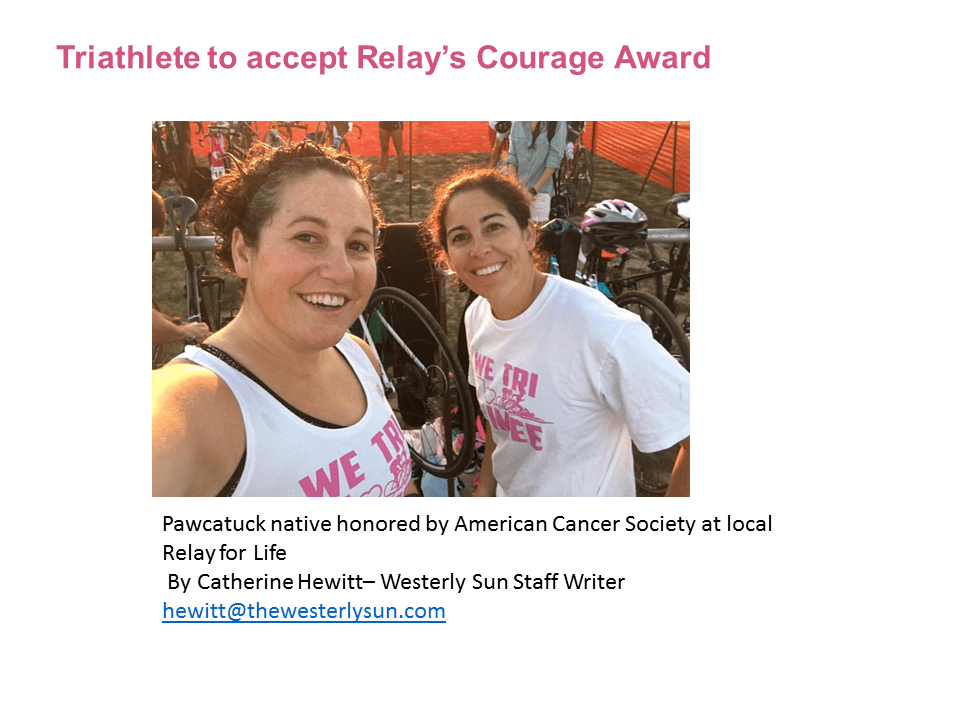 WESTERLY — In the race against cancer, Aimee Reed, a triathlon athlete who was given a diagnosis of a rare form of breast cancer last year, has inspired others with her bravery, endurance, and willingness to help others.

On Friday, Reed, of Pawcatuck, will be the recipient of the 2016 Relay for Life of Greater Westerly Courage Award, which recognizes a local person with cancer or a cancer survivor who has had a significant impact on the lives of others. The award recipient embodies personal perseverance in the battle against cancer and encourages the community to support and participate in programs associated with the American Cancer Society. 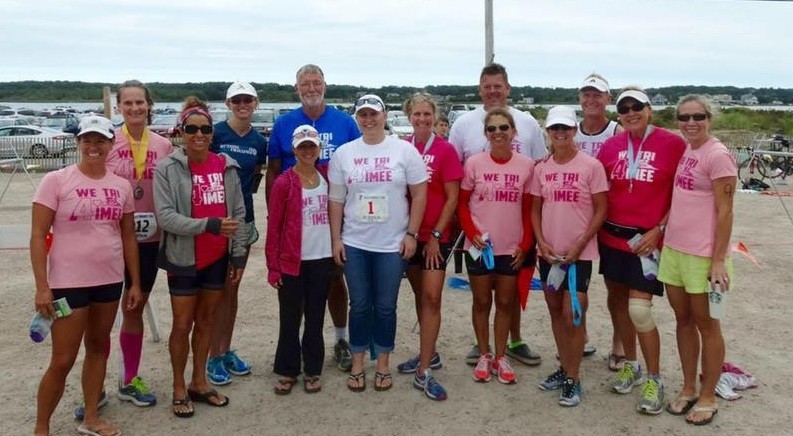 In April 2015, Reed, now 32, was preparing for her most challenging triathlon season — four sprint triathlons, one Olympic-distance triathlon, and one Ironman 70.3 triathlon — when she found a lump the size of a golf ball on the right side of her breast.

“I carry a rare case of the BRCA-2 and neither of my parents carry that gene,” Reed said. “I’m one of five cases in the world that has seen this happen.”

Reed’s cancer required three treatments — chemotherapy, surgery, and radiation. Her triathlon friends Terry Hiltz and Polly Chorlton, both of Westerly, equated it to getting through each event in a triathlon. “They would come to my chemo sessions every week and they would talk about what’s going on in the triathlon world and we’d would relate it to my treatments,” Reed said. “They’d say, you have 12 of these chemo doses in 12 weeks — it’s like doing intervals, like a workout, you’re halfway through, everything else from here is downhill, you’re coasting, everything’s good you’re going to get through it, you’ve been through the hard part already.

“Same thing with the separating chemo, from surgery, to radiation — it’s like a triathlon — get through one thing, move on to the next event, and that’s going to be your surgery, and then you just have your radiation to go through.”

Chorlton, who is also Reed’s triathlon coach, Hiltz, and other friends formed a triathlon group to support Reed in her cancer treatments.

“My friends and I have been doing triathlons together for the past three years and when I got cancer last year I had to stop training,” Reed said. “They surprised me last year at the Mystic Triathlon — they were all wearing T-shirts that said “We TRI 4 Aimee” and they dedicated their entire triathlon season to me. It’s humbling to know I have these supports and friends who are rooting me on.”

Through her Facebook community page, Reed’s family and friends have formed teams and participated in triathlons in her honor and to raise money for her treatments.

Because of the side effects from chemo, surgery, and radiation, Reed will continue to need medical treatments, which are expensive.

“I have regular physical therapy that I go to once a week, and scans to have done to make sure everything is staying stable and all of those co-pays add up so quickly,” she said.

Previously a special education teacher, Reed has worked as a life skills counselor at a group home for the past year and said she has struggled to resume triathlon training.

“I’ve been able to start training again but it’s difficult to manage my time between doctor’s appointments and I work second shift,” she said. “I keep reminding myself that I’m not as fast as I used to be and that’s OK — the goal is just to finish it and enjoy it and be out there with my friends, that’s the most important part of it.”

This Friday, Reed and her family will help battle cancer by participating in the 19th annual Greater Westerly Relay for Life.

“I like Relay for Life because the money goes to the American Cancer Society and they raise money for research for all cancers,” she said. “I want every to know that everyone is welcome — power in numbers — we’re trying to get as many people as we can to come out and support the community.”

Relay for Life will take place from 6 p.m. on Friday, June 3, to 8 a.m. on Saturday, June 4, at the Westerly High School track.