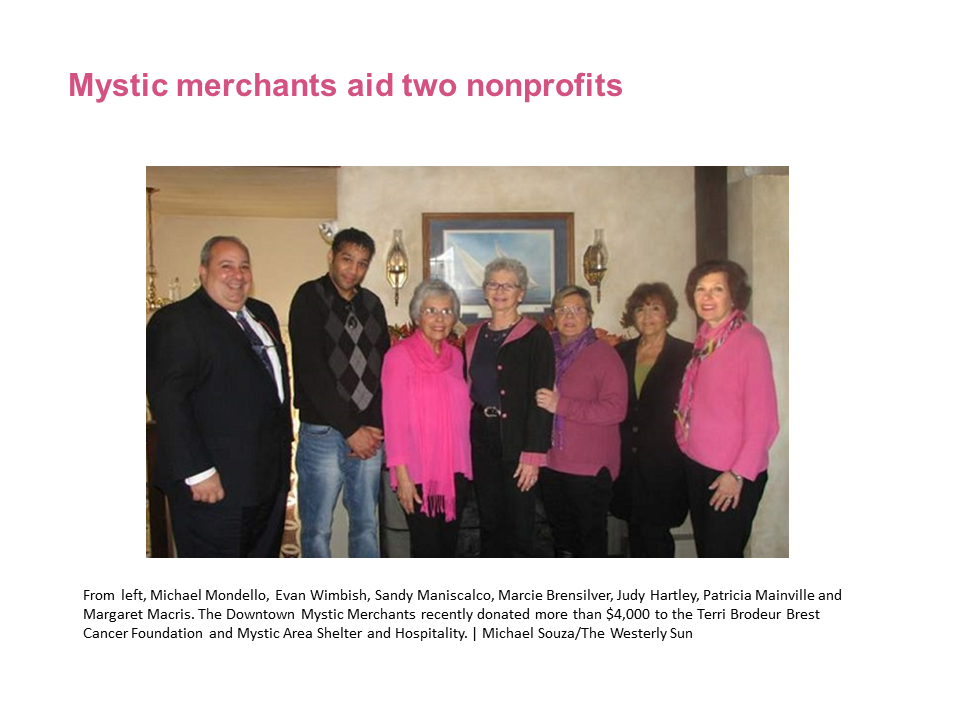 MYSTIC — There’s something special when a nonprofit donates to another nonprofit, and that’s exactly what happened Friday morning, when the Downtown Mystic Merchants presented checks to the Terri Brodeur Breast Cancer Foundation and Mystic Area Shelter and Hospitality. “That’s what it’s all about,” said Judy Hartley, president of the merchants organization. “It’s a good feeling to know that you’ve helped.”

Conceived in 2013, the group became a nonprofit the following year. Its initial purpose was to represent the 80 downtown specialty shops, but by the time it became a nonprofit its goal included giving back to the community in a significant manner. Therefore, every time it holds an event, it has a charitable component.

They have been an unqualified success. The organization is responsible for the Mystic Pirate Invasion; Paint the Town Pink, Mystic Eats, downtown strolls, and luminaria. It participates in many more festivities throughout the area. If there is an outdoor event or even one indoors, chances are the merchants are contributing in one way or another.

“It’s not only about giving but it’s also about keeping it local,” Hartley said. Thus, members of the Brodeur Foundation gratefully accepted a check for more than $3,000. Based in New London, the Terri Brodeur Breast Cancer Foundation takes pride in the fact that all of its fundraising dollars go directly to breast cancer research, and administrative costs are either sponsored or volunteered.

Accepting the check were Sandy Maniscalco, co-founder and interim executive director, and Marcie Brensilver, who recruits fundraising walkers and is the top overall fundraiser for the past ten events. “In ten years we’ve raised more than $3 million,” Maniscalco said. “We wouldn’t be able to do it if we didn’t have great volunteers and sponsors.”

The foundation awards about three research grants each year in an effort to promote clinical fellowships in high impact research areas. For many of their recipients it’s the first time they’ve received funding. “Some of the research is cutting edge,” Maniscalco said, “and I’ve been told it’s getting noticed in the medical community.”

Brensilver has helped enlist volunteers and participants to the cause and is responsible for more than $100,000 being brought into the organization. A proud 24-year breast cancer survivor, she works hard in recruiting walkers and is dedicated to the cause.