A walk to remember

Honorary chair of TBBCF walk vows to continue the fight 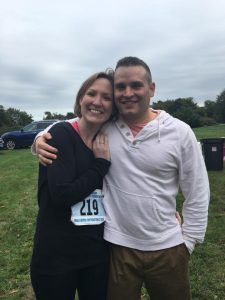 Johanna D’Addario, honorary chair of the 2018 Walk Across Southeastern Connecticut, was happy when she crossed the finish line at the Terri Brodeur Breast Cancer Foundation’s annual walkathon on Oct. 6, 2018. Flanked by her mother, her husband and her oncologist, D’Addario, a two-time cancer survivor, was proud to have walked a half marathon and to have raised thousands of dollars for breast cancer research.

But when she took the microphone during the closing ceremony a short time later, she was overcome with emotion. She said she did not want to spread false hope because her cancer was caught early and she was healthy enough to walk the half marathon; because today’s reality is not everyone survives.

Breast cancer still kills thousands of women every year, and this year TBBCF lost two devoted supporters.  Aimee Reed who died Aug. 29, 2018, at the age of 34, and Cynthia Ulrich, who died June 10, 2018, at age 65. TBBCF was established in 2006 by Sandy Maniscalco and Norman Logan, in honor of their friend Terri Brodeur, who died in 2005 leaving three young children. Norma Logan died the following year.

“I’ve been fortunate,” D’Addario said when she regained her composure. “… I can help spread real hope. There’s on-going research funding, treatments are developed and science is advancing.”

She gave shout-outs to her doctor, her mother, her husband and TBBCF.

“The staff and volunteers are the real deal. They’re amazing,” she said.

This year, 300 walkers participated in the walking marathon. The walk, along with fundraising events and promotions, will raise about $300,000 for TBBCF. That money will be awarded to doctors and researchers in the form of $100,000 grants.

D’Addario was nominated to be the 2018 walk chair by her oncologist, Erin Hofstatter, an oncologist at Smilow Cancer Center at Yale-New Haven Hospital and a 2014 recipient of a $100,000 research grant from TBBCF. Hofstatter is examining novel techniques to advance methods of prevention of breast cancer and in detecting it early in women who are at a higher risk of developing breast cancer. Hofstatter said she’d been wanting to do the walk and was touched when D’Addario asked her to join her team.

“It was so inspiring to be a part of everything, and it meant so much to help raise money for the next round of researchers” she said “It also made me appreciate so much more every dollar I received from this amazing organization.”

Hofstatter complimented TBBCF for running a smooth event and was in awe of all the walkers and the volunteers who made the event successful.

Hofstatter and D’Addario became friends as D’Addario navigated her cancer diagnosis and after D’Addario was hired as a physician’s assistant at Smilow, where they both work.

At first, D’Addario was hesitant to the be the face of a survivor She said she was unsure of taking on the duties because, while on the outside, she said, she looks normal, her diagnosis changed her life. But then she realized every diagnosis changes lives. Her breast cancer was discovered early and she did not need chemotherapy or radiation, but not everyone survives. Because of a genetic mutation, she also had curative surgery for stomach cancer in 2010 at age 26 and must always be vigilant of a recurrence.

D’Addario wrote a heartfelt and personal blog, which appeared on the TBBCF website at https://www.tbbcf.org/about-johanna-daddario/ and was shared on social media, about her struggles and the realities of a young woman facing cancer. She may never have children. She tires often. She has to watch what she eats.

“I do have to admit that I was emotionally and physically exhausted after the walk, and had my feet up on the couch by 7:30 that night,” D’Addario said a few weeks after the walk. But she said she is now ready to walk again “I have a bigger goal for walking and for fundraising. I’m proud to have raised over $2,000 this year, but hope that I can increase my fundraising goal even more for next year.”

Her mother Cindy Chelcun said participating in the walk and writing about her most intimate fears, helped her daughter legitimize her personal struggles. Despite her gratitude for early detection and treatment, in contrast to other breast cancer patients and survivors, her mom said cancer takes a toll – on the patient, their families and friends.

“The walk was, I think, powerful for her in her gratitude to Dr. Hofstatter, her appreciation of the research funded by TBBCF, and again, by the inspiration of the survivors, families and memories of others like her,” Chelcun said. “It’s all been part of her healing.”

D’Addario said being surrounded by strong survivors and their families, as well as the families of those who have died, elicited a sense of belonging, hope and determination.

“The (TBBCF) community is so deeply committed and generous in giving gifts of all kinds – monetary, research support, connections and loving support – that one can’t help but be inspired,” she said. “To say that October 6th was an amazing day would be an understatement. It was an incredible day. The feeling of walking 13-plus miles with other men and women who share a common goal was inspiring. Seeing the support from the community members at every stop was heartwarming. And how lucky was I to be able to share the day with my husband, my mom, my friends, and my oncologist? Very lucky, indeed, to have such wonderful people in my life.”