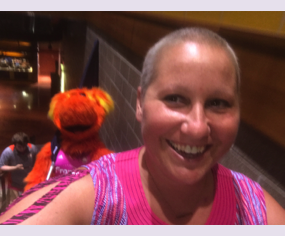 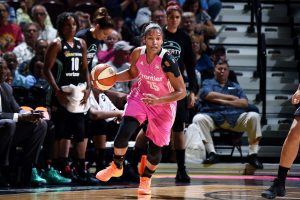 On Friday, August 18, 2017, the WNBA Connecticut Sun took on the New York Liberty at the Mohegan Sun Arena. There was much more happening at this game than just basketball. The CT Sun team was “rocking the pink” from head to toes with sporty pink uniforms. Even Blaze, the CT Sun mascot, was wearing a special pink uniform. As I looked around the arena, I noticed there were many spectators wearing pink to show their support for breast cancer awareness. Not only were people showing their support by wearing pink, but they were also gaining knowledge as they walked around the concourse and visiting foundations such as the Terri Brodeur Breast Cancer Foundation informational table.

This special Rock the Pink event brought thousands of people to the arena. Not only did spectators

get to see an amazing basketball game, but they were also part of something much bigger. The Terri Brodeur Breast Cancer Foundation was given the opportunity to sell tickets through August 25, 2017 at a discounted group rate of $22 where $6 of each ticket would go back to the foundation (use coupon code TBBCF). The CT Sun has decided to match the donation amount, up to $500, meaning that $12 from each ticket sold will go back to TBBCF and directly go to breast cancer research.  Not just that, but the CT Sun auctioned off the same signed pink jerseys that the team wore during the game, two basketballs signed by the entire team, and signed head ties where all proceeds from the online auction went to TBBCF. On Friday night during half time, the TBBCF promotional video was displayed on the jumbo-tron for thousands to see what an impact a small group of determined individuals can have on such a health crisis. 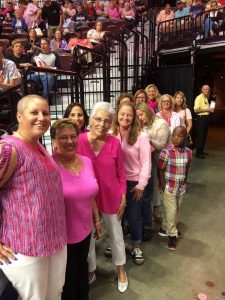 On a personal level, this night was one of the most fun experiences I have ever had in my life. As a huge fan of women’s basketball, I was instantly thrilled when I learned of the opportunity to go out on the court to receive a signed basketball. As a cancer patient though, I started to have nerves and anxiety about the event itself. “Was I going to have a full blown, drenched in sweat hot flash just as I was about to receive the basketball?” Hot flashes have been making regular appearances since I started this oral chemotherapy, and the more nervous or anxious I am about something the worse the hot flash is. I went to the game prepared with a paper towel in my back pocket just in case. Turned out I didn’t need it, but I was glad to be prepared. 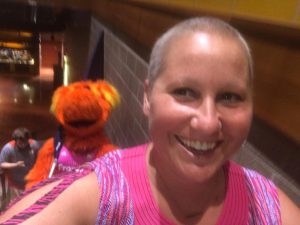 A young man escorted the 12 of us to courtside before the game where I was able to look around and gain my strength. After finding where my sister, brother-in-law, and nephews were sitting, I was starting to feel the excitement. The two teams were right there in front of me warming up for the game. I couldn’t believe how close we were. I turned and said to my friend Sandy, “This is so AWESOME!”, and in that moment I felt like a little kid again. I had no worries about life, cancer, what I looked like or what was about to happen next, I was completely living in the moment. Blaze gave us all a high five and hug just before we went on to the court. The lights dimmed and the music was pumping. Again, I thought, “This is SO cool!” I was walking on the same basketball court that Morgan Tuck, Alyssa Thomas, and Jonquel Jones all play on. After walking back off the court and making my way to my seat, I couldn’t stop smiling. As I found my family I could see the pride in their eyes and excitement for the game. I am extremely grateful to have been a part of this experience and to spend such quality time with my family and friends. Special thank you to TBBCF and WNBA Connecticut Sun for making a difference in the lives of cancer patients.