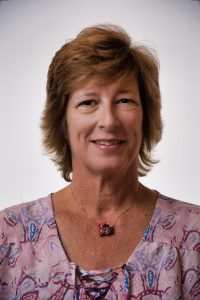 There’s something you should know about Kate Davis, the director of operations and walk chair at Terri Brodeur Breast Cancer Foundation. She used to be an air traffic controller.

That might explain how competently she’s been managing the day-to-day operations of the non-profit organization and how the 13th annual Walk Across Southeastern Connecticut on Oct. 6, 2018, went off so smoothly.

But there is something else you should know about her. She is funny, kind, a quick study, and as passionate about TBBCF’s mission to fund research to find a cure for breast cancer as those who started TBBCF in 2006.

“She has breathed new life into the organization,” said Sandy Maniscalco, a co- founder of TBBCF. “She’s a good project manager and she’s good at motivating the people on her team.”

“I really feel like there is no end to the benefits we’ve received and will receive by having Kate join our team,” agreed Stacey Gualtieri, a founding board member and treasurer/walk leader.

Davis, who joined TBBCF last year, said, “it was really hard not to be hooked” after meeting those that founded the group and those who continue to volunteer and dedicate time and money for the cause. TBBCF, based in New London, gives 100 percent of its gross fundraising dollars directly to breast cancer research. Since its founding in 2006, it has awarded more than $4 million in research grants.

“I really love what they’ve built,” Davis said. “It’s an honor to step into their shoes.”

Davis said TBBCF has grown from a grassroots group to a nationally recognized organization that is known to researchers from across the country.

Pat Newborg, a former walk chair, has nothing but accolades for her replacement.

“She is a take charge and ‘get her done’ kind of woman,” said Newborg. “Her past experience as an air traffic controller is an asset to the needs of the walk chair, who has to pay attention to details. As a leader, she has expectations from her team leaders but is patient and helpful when the need arises. Kate has a great sense of humor and makes working with her fun. She did a fabulous job on her own this past year with only a few questions or meetings with me.”

Davis agrees that her 25 years as an air traffic controller has been good training for the position.

“You hear everything that’s going on. You’re always on alert,” she said.

Doug Hoyt, a walk leader and brother-in-law of the group’s namesake, the late Terri Brodeur, said Davis is extremely helpful, jumps in to assist and is appreciative of folks associated with the foundation who volunteer their time.

“She has been the messenger of the walk leaders to bring ideas to the board for approval/input,” he said, even taking the lead to clean out and take inventory of the foundation’s storage facility. “She’s always very pleasant and willing to listen to others and always offering to help make things easier for everyone involved on the foundation … Kate appears to step in and help with or take the lead on many roles with the foundation and is a valuable asset.”

She even took time during the year to design a new breathable hat that is available for sale, he said.

Although neither Davis or her three sisters or her nieces have faced a breast cancer diagnosis, she knows many who have. Since 2002, while living in San Francisco where she was an air traffic control specialist with the FAA, she and her sisters participated in annual walks to raise money for breast cancer support and awareness.

“Being one of four girls, it almost seems inevitable it would strike us,” she said. But despite call backs after mammograms and a few scares, they’ve been lucky, she said.

After retiring in 2014, Davis relocated with her husband Paul from the San Francisco area to Uncasville, where one of her sisters also lives. She walked her first TBBCF marathon in 2015 after reading about the event in the newspaper. That October, she met Sandy Maniscalco at a fundraiser at the Brazen Hen in Westerly.

“By the time dinner was served I was volunteering,” Davis said, adding that Maniscalco, who is a bundle of enthusiasm about TBBCF, has a knack for seeing the sparkle in someone and harnessing that energy.

“I needed her as much as she needed me,” Davis said.

When Davis was named chair of the 2018 annual Walk Across Southeastern Connecticut, she lost no time in contacting team leaders – from the cyclists who provide encouragement to walkers, to those offering medical assistance, to those who organize the opening and closing ceremonies.

“Kate is wonderful and a breath of fresh air, absolutely,” said Stacey Gualtieri, one of the walk leaders. “She has a lot of common sense and we’ve worked together to streamline procedures on the donor aspect of the record keeping. She works to thoroughly understand what she does and how things work so she can handle things properly.”

“Kate has been wonderful. She has such a calm way about her — no matter how crazy things are,” said Amy Caster, another walk leader. “She provided aerial photos of the pit stop locations with the placement of porta potties and tent setups clearly marked … Overall she was amazing at keeping track of everything that was going on. She seemed to know everything that was happening with every aspect of the walk – I have no idea how she did that.”

Caster added that Davis pays close attention when people come to her with problems.

“She has a way of making you feel like you are the most important person that she is dealing with, and she was always so encouraging and thankful,” Caster said.

John LaMattina, president of the board, said Davis brings energy, new ideas, and offers a variety of solutions once a problem has been identified.

“She’s brought a tremendous can-do attitude and really believes in the organization,” he said. “She’s very committed, and that commitment comes across in everything she does.”

One example is the thank you emails sent to online donors, many of which are used to secure matching donations from employers. The letters were routinely sent out when there was a request for one and the office always seemed to be playing catch-up. Davis streamlined the process so letters are sent out almost immediately after TBBCF receives a donation and all pertinent information is included.

Davis said working with TBBCF and all the volunteers is inspiring. While survivors tell their stories of courage and hope, Davis is aware that not everyone survives breast cancer and that, in part, motivates her.

“People are still dying,” she said. “It makes you not want to quit.”

But ever the optimist, Davis is banking that a cure for breast cancer is coming in her lifetime.

While there are walks and fundraisers for research for all types of cancers, she believes there will be a domino effect if there is a breakthrough in one type of cancer.

“It’s all connected,” she said. “I hope the whole thing comes tumbling down.”