Getting creative with virtual fundraiser 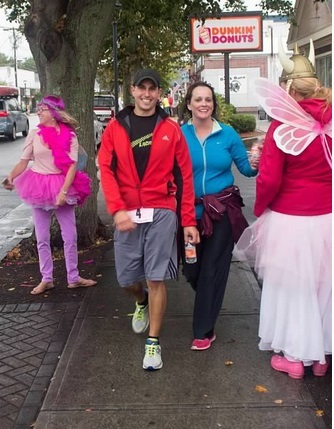 Tips on creating a virtual fundraiser

The Terri Brodeur Breast Cancer Foundation Annual Walk Across Southeastern Connecticut is going virtual this year, and participants have a chance to create their own event. Pick the time and the location, decide what you want to do, call your friends and family, and collect donations.

“The safety of our walkers, volunteers and their families are our number one concern. Going virtual was the only way to ensure everyone’s safety” said Kate Davis, walk chair for the Brodeur Foundation. “It was a very hard decision and not one we took lightly.”

But she is excited to see how the foundation faithful will create their own individual events for this year’s “Virtual Miles to Cure Breast Cancer.”

“What’s going to make the virtual event successful is conveying to people the passion about finding a cure for breast cancer,” she said.

Eric Bauman of East Lyme, a loyal TBBCF supporter for 15 years, has raised an estimated $100,000 for the foundation. And every penny of that money has gone to grants for breast cancer research.

He did the TBBCF marathon walk once and has done several of the half marathons, but his fundraising events are triathlons and cycling rides he has done all around the country, and he asks friends and family to support him. The money he collects goes to the Brodeur Foundation. He’s done a triathlon in Utah at 6,000 feet elevation, and he’s done the “Escape from Alcatraz” triathlon in San Francisco – 1.5-mile swim,18-mile bike ride, 9-mile run.

“I will say, it’s going to be different this year,” said Bauman, who works at Pfizer Inc. and was a friend of Terri and Tim Brodeur. This year he hopes to do a Century Ride – that’s a 100-mile bicycle ride.

He has some tips on creating a successful virtual fundraiser. First and foremost, you have to make it fun, he said. He suggests mapping out a route and a goal, like a jog around your neighborhood or a walk around Block Island. The most important thing is letting donors know what you’re doing. He emails family, friends, coworkers and colleagues to tell them why supporting breast cancer research is important to him. He also explains his personal goals. He keeps his supporters up to date on his training and includes lots of pictures. On the designated day, he suggests dressing up, wearing silly hats, carrying signs and having someone drive by and take videos.

When he finishes his event, he sends emails to supporters, reminding them they still have time to donate. He also shares his thoughts on the event, such as challenges he faced, people he met along the way and anecdotes about the experience.

“I personalize it,” he said. “And it helps to make fun of yourself.”

He’s quick to point out, though, that any virtual event – easy or hard, long or short – is worthwhile. The important thing is to let people know why you are participating and why it matters.

Kate Davis, who has participated in breast cancer walks since 2002 and has raised more than $60,000 will be doing her third virtual walk for TBBCF this year. Because she is the foundation’s walk chair, she has been too busy on the walk day to participate in the actual walk.

She’s already planning her virtual walk for this year and is sending emails to family and friends across the country asking them to sign up and join her, virtually, of course. Since her maiden name is Sterling, she’s named her team the Silver Bullets and is having t-shirts made. She has already raised $1,035 toward her goal of $3,000.

“It’s a great opportunity to spread the word about Terri Brodeur and cast a wider net,” she said. “People can participate apart but together.”

Because of the Covid-19 crisis and safe social distancing concerns, the foundation is asking all participants this year to raise at least $150 and cancer survivors and students (12 to 22) to raise $100. Registration is $25. Over the years, many walkers have raised much more than the suggested minimums, and she hopes that trend continues.

“It’s going to be different doing it by yourself or in smaller groups,” she said. “We won’t be there to offer the same support as in the past, but it’s possible to do this, and it is a cause near and dear to people’s hearts.

For more information on “Virtual Miles to Cure Breast Cancer” and to sign up to participate, go to https://www.tbbcf.org