He gets by with a little help from his friends

In the past, Jay Gionet has raised more than $62,000 for the Terri Brodeur Breast Cancer Foundation. And he’s not done yet. 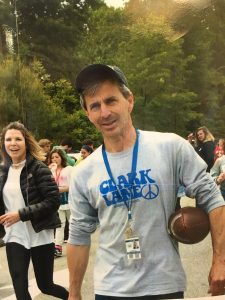 During a two-hour walk-a-thon on Memorial Day Weekend, Gionet, a math teacher at Clark Lane Middle School in Waterford, along with 600 students and 50 teachers and faculty, raised about $25,000 that will be distributed to TBBCF and a half dozen other charities.

For Gionet, who lives in Niantic with his wife, Mary and 9-year-old daughter Olivia, it’s all about giving back to the community.

It’s a lesson his parents taught him and his five brothers and four sisters while growing up in Schenectady, NY. And it was a lesson he took to heart about 10 years ago when his mother was diagnosed with breast cancer.

In 2007 he organized a fundraiser with the students and staff at East Lyme Middle School where he taught math. While teaching linear equations, Gionet came across a word problem in a math textbook. It was all about slopes and intersecting points and it used a walk-a-thon as an example. An idea blossomed.

Gionet said his mother’s diagnosis, his parents 50th wedding anniversary and the discovery of the walk-a-thon problem in the math workbook “Moving Straight Ahead,” all focused him on a lesson plan for his students that could raise money for cancer research and honor his parents. 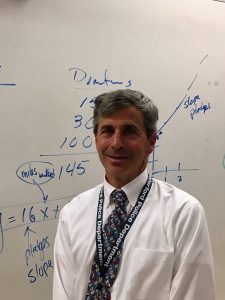 Around the same time, he was also serving jury duty in New London with a volunteer from TBBCF. There were long conversations during lunch breaks about Terri Brodeur and the need for funding for cancer research, he said.

“I wanted to do something to celebrate the values my parents had,” he said. “Mom and Dad taught us the value of giving back.”

His dad died two years ago, but his mother, now 92, is in remission and doing well, he said.

After taking a break from fundraising – he changed jobs and adopted his daughter from China – he roared back on the scene last year organizing a walkathon for his math students at Clark Lane Middle School. They raised $23,500 for charity, including the $2,187 donated to TBBCF.  On May 25, 2018, students and faculty spent two hours walking the school track and raised in excess of $25,000 with about $3,000 or more donated to TBBCF.

Gionet now wants to take his lesson plan national. He figures if he can get 50 schools to raise $20,000 each, that would be $1 million for cancer research.

“That warms my heart,” he said

But Gionet is quick to point out that his success is not his alone. He has surrounded himself with “experts.”

“It’s been a real team effort,” he said. People acting together toward a common goal is power, he said.