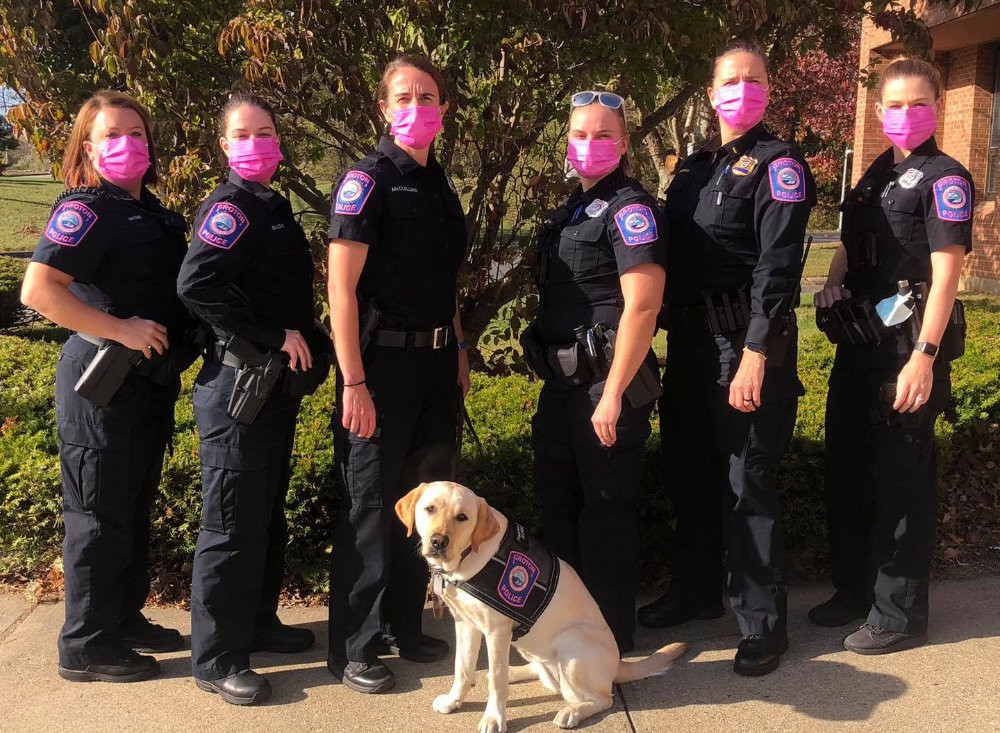 Bobbette Clapsadle, a dispatcher at the station and a cancer survivor, helped organize the month-long promotion along with Community

Police Officer Heather McClelland and Patrol Officer Brenna Bolduc. During the month of October, officers were allowed to switch their Groton Town Police patch with one specially designed to raise awareness about breast cancer. The entire department was involved with the fundraiser; and people from across the country, including Florida, New Hampshire and Ohio, purchased the blue patches with Groton Police embroidered in pink.

The police officers sold hundreds of patches for $10 each and raised $2,310. The Canadian money came from someone in Canada who collects police patches.

“We were excited to get on board with your guys,” Officer McClelland said. “It was a group effort.”

Officer Bolduc’s father, Peter Bolduc, a retired Willimantic police sergeant living in Florida, designed and created the patches. Officer Bolduc donated the cost of the patches, and the seamstress services to sew on the patches were covered by a generous donor. They put the fundraiser details out on the department Facebook page and received inquiries from across the country.

When the officers were looking for a place to donate, they turned to Clapsadle, who has supported TBBCF since being diagnosed with breast cancer in 2013. Clapsadle said when they asked her for a suggestion on who they should donate the money to, she said she blurted out the Terri Brodeur foundation.

“It blows my mind how dedicated they (TBBCF) are, and they are so appreciative,” she said.

Clapsadle is the head of Team Be Strong, which has raised thousands of dollars each year for TBBCF.

“We appreciate this,” said Patti Burmahl, president of the TBBCF Board of Directors, who accepted the money recently at the Groton Town Police Station, along with Amy Caster development/outreach director for the foundation.

“It all adds up,” Burmahl said. “We would not exist without groups like yours.”

Despite having to replace the foundation’s annual Walk Across Southeastern Connecticut with a virtual version because of Covid-19, more than 300 walkers participated in October. Burmahl said the foundation expects to award at least three $100,000 research grants this year.