Thirteen years ago when Bill McDonough received a call at his home in Stonington from the Terri Brodeur Breast Cancer Foundation seeking donations, he politely declined and hung up the phone.

“She sounded like a telemarketer,” McDonough said recently, chuckling as he thought about Ellen Swercewski’s telephone call in 2006. “But she called me right back.” 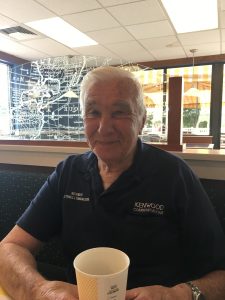 From that moment forward, McDonough, the owner of Independent Electronics and Communications, agreed to provide 20-25 walkie talkies for the TBBCF Walk Across Southeastern Connecticut fundraiser. He’s been supplying the walkie-talkies for the annual walk ever since.

“It was God-driven that I called you back,” Swercewski, one of the founding members of TBBCF, told McDonough when the two met for coffee in June. “I really needed those radios.”

For 13 years McDonough has been providing radios for the annual walk. He also found new friends in Swercewski and her husband, David.

“Bill is the nicest man and I love him to death,” she said.

Swercewski, a TBBCF board member, said to this day she doesn’t know why she called back McDonough, adding it was out of character for her to be so persistent. She didn’t know McDonough at the time. She had picked Independent Electronics out of Yellow Pages phone book in an effort to solicit help from local businesses for that first walk.

McDonough said once Swercewski explained that she was representing a new non-profit that promised to give 100 percent of gross fundraising dollars toward cancer research, he decided he was going to find a way to help. He had lost his 62-year-old wife Linda to ovarian cancer in 2003.

“It was was fresh on my mind,” he said. “I knew I was going to get the radios for them and not charge them, out of respect for my wife.”

But there was one problem. McDonough didn’t actually have the walkie talkies TBBCF was requesting, but he knew someone who did. He called his friend Mike Scranton who owns Scranton Communications in East Hampton. Scranton provides two-way radios for fairs, festivals, parades and other events throughout the state. The first Saturday in October, the day of the TBBCF marathon, was between events so the equipment was available. McDonough picked up the radios, held a class to teach volunteers how to use them, and then returned them to Scranton after the walk. He said if he had not found the radios he was going to buy them himself.

“It gives me a lot of satisfaction,” he said. “If I can help one person that’s great. If one person survives, I’m satisfied.”

Volunteers use the radios throughout the annual 26.2-mile marathon walk from Old Saybrook to Waterford to keep tabs on the more than 350 walkers who raise more than $200,000 for TBBCF. This year’s walk will be held Oct. 6, 2018.

McDonough, 83, has been active in the Stonington community where he grew up and raised his own three sons. He’s an Air Force veteran, served two terms on the Stonington Board of Selectmen and sat on the Water Pollution Control Authority. He retired from the Naval Underwater Systems Center in New London after a 27-year career as an electronics technician.

Helping out TBBCF all these years is McDonough’s way of honoring his wife and paying it forward for the kindness and care his wife received while she battled her cancer.

“It’s just something I can do to repay for all the goodness my wife got and all the help she got,” he said.  He believes in TBBCF and its mission.

“Whatever they want, they will get it from me,” he said.