Stonington teenager gets real with TBBCF

Keegan Donohue has solicited funds for the Terri Brodeur Breast Cancer Foundation, has walked in the annual Walk Across Southeastern Connecticut fundraiser and has seen first-hand a family friend struggle with breast cancer.

That is why she chose an in-depth look at TBBCF as her senior class project at Stonington High School. She gave a PowerPoint presentation recently to teachers, classmates and guests, explaining how the foundation operates and the importance of the foundation’s mission to fund breast cancer research. She included breast cancer statistics, such as annually about 268,600 women and about 2,670 men are diagnosed with cancer, and how TBBCF raises money that directly goes to scientists and doctors for research.

The family friend, Aimee Reed, who also was Keegan’s babysitter when she was younger, fought the disease for 3.5 years. Reed was involved with TBBCF and helped raise thousands of dollars for the organization before she died last year at age 34.

“The foundation has influenced my life in many ways,” Donohue explained during the presentation.

Also, in attendance at the presentation was co-founder of TBBCF Sandy Maniscalco, and John LaMattina, a founding member of the board of directors. LaMattina also sits on the Scientific Advisory Board, which annually awards $100,000 grants to researchers who are searching for a cure for breast cancer, or looking for better treatment options for those already diagnosed.

Donohue worked closely during the school year with Maniscalco, visited past grant recipients at Yale-New Haven Hospital and Massachusetts General Hospital and interviewed Dr. Andrea Silber, who was Aimee Reed’s oncologist at Yale.

Donohue said she wanted to know how doctors cope with caring for breast cancer patients and how they deal with their emotions when a patient dies.

She said Dr. Silber told her she separates her work life from her home life and does things that make her happy, such as shopping for clothes. She said she takes care of her own needs because then she can be happy and upbeat to care for her patients. 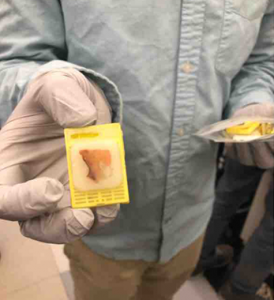 Donohue also was excited to visit with Dr. Sheng Sun, a 2018 TBBCF grant recipient at Mass General, who showed her a 100-year-old-slide of breast cancer cells.

She explained that TBBCF promises to give 100 percent of its fundraising dollars directly to breast cancer research, and each year raises between $300,000 and $400,000 and awards three or four $100,000 grants to young researchers looking for a cure and better treatments. The foundation relies on sponsorships to cover expenses, and operates with about 95 percent volunteers.

“She did a wonderful job,” agreed Maniscalco and LaMattina after the 10-minute presentation.

Donohue, who will attend Stony Brook University in the fall and plans to study biochemical engineering, said working with Sandy Maniscalco and learning about TBBCF has helped her to focus her future.

“I don’t know yet if I want to be a researcher,” she said, adding that she is looking at premed classes and investigating other career choices that involve cancer research.