From bedside to bench and back

A few years ago, the doctors at the Center for Breast Cancer at Massachusetts General Hospital treated a 56-year-old woman with breast cancer who had no identifiable abnormalities to put her at high risk for recurrence. But two years later, the disease came roaring back. The patient died four years from diagnosis. 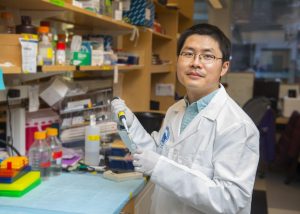 The case spurred a project at the cancer center to study the blood of cancer patients to look for clues as to why the cancer had come back with such a vengeance. The Terri Brodeur Breast Cancer Foundation awarded a $100,000 research grant in 2018 to Sheng Sun, PhD who is working on the study at Mass General under the direction of Leif Ellisen, MD, PhD, program director of the Mass General Cancer Center.

Dr. Sun is studying the blood of breast cancer patients to develop a diagnostic test for those with a certain type of metastatic breast cancer. Identifying which cancers could metastasize will help in providing appropriate early treatment. He is looking at the blood to identify abnormalities which, in some cases, may predict how aggressive a tumor will be. That, in turn, will mean more targeted therapies to fight the cancer.

“I want to thank Terri Brodeur,” began Dr. Sun, when he gave an update on his work recently to some members of the foundation.

Dr. Sun explained his work in an animated and technical presentation to John LaMattina, PhD, president of the TBBCF board of directors and co-chair of the scientific advisory board; Michael Morin, PhD, scientific advisory board member; and Sandy Maniscalco, co-founder and director of development and outreach for TBBCF. Keegan Donohue, a volunteer, walker and student ambassador also attended the meeting.

Dr. Sun has identified novel gene fusions in 14% of patients with hormone receptive metastatic breast cancer, which provides strong evidence that these tumor-specific genetic rearrangements are powerful drivers of treatment resistance and poor outcomes. Successfully tracking and therapeutically targeting these fusions could thus have a major impact on patient outcomes.

The hypothesis is that patient-derived circulating exosomes (tiny cell-derived vesicles that circulate in the bloodstream) are likely to contain unique nucleic acids and proteins corresponding to the fusions that could potentially serve as novel biomarkers.

Dr. Sun, a postdoctoral research fellow, first tested his theory in test tubes, moved on to mice in the laboratory, and is now taking blood from patients for testing. The next step is to design a clinical trial around the research. Patients at the cancer center now voluntarily donate a vial of blood during routine blood draws for the study.

Dr. Sun called his project going from “bedside to bench” and back again. The study began because of an actual patient, moved to the lab for research, and is now back with patients who are donating blood samples for more research.

At the end of his presentation, Dr. Sun again thanked TBBCF and said he was inspired when he saw pictures of the October fundraising walk.

“I feel motivated … when I saw the walk and all the people who got together and supported each other,” he said.

Dr. Ellisen, the director of the cancer center, called Dr. Sun a “wizard.” Following the presentation. Dr. LaMattina said “Dr. Sun is really on to something.”

The group also went on a tour of the Ellisen Lab, where they ran into another TBBCF grant recipient, Mihriban Karaayvaz, PhD, who received a $100,000 grant in 2016 and is studying the breast tissue of those who carry the BRCA gene mutations.

TBBCF provides funding to researchers investigating breast cancer cures and patient treatment options. The foundation is founded on the pledge of delivering 100 percent of gross fundraising dollars to breast cancer science and has held fast to this promise since its inception. The foundation’s Grant Program seeks to fund clinical and pre-clinical fellowships in high impact, breast cancer therapeutic research areas.

He is a postdoctoral research fellow at the Massachusetts General Hospital Cancer Center/Harvard Medical School.