Golfers again show their generous side 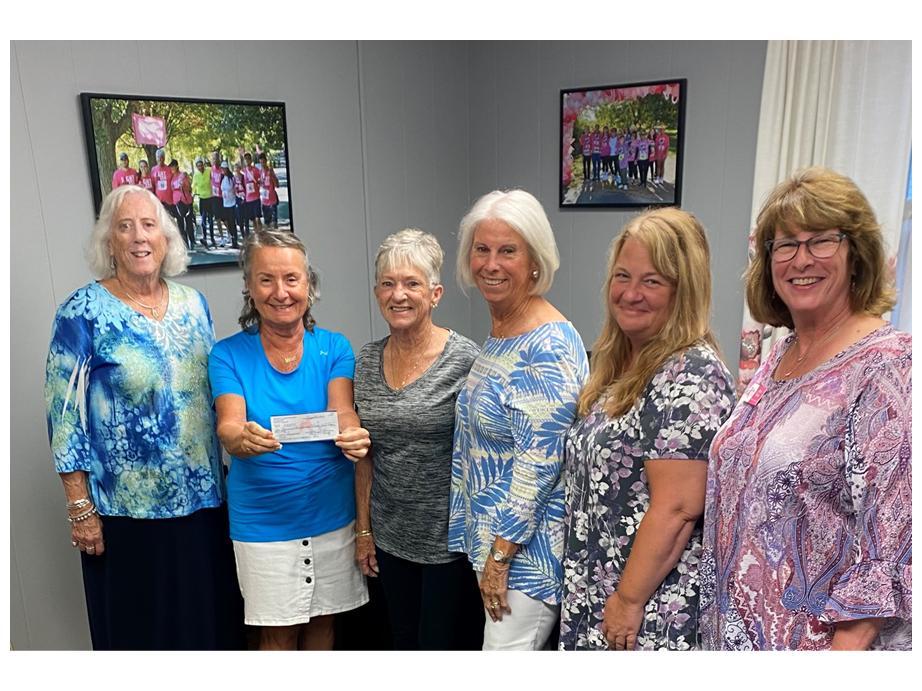 Who says you can’t raise money during a pandemic?

The Great Neck Country Club Women’s Association raised more than $10,000 for the Terri Brodeur Foundation at a golf tournament in August.

“We do have a very supportive golf club,” said Pat Romano, who organized the 2021 tournament with fellow members Mary Guertin, Kathie Vannini, Mary O’Reilly and Cathy Patterson. “And the men are our biggest supporters.”

Nearly 90 golfers participated in the Aug.10 tournament on a sunny but windy day at the Waterford golf course. Romano said the men, mostly decked out in shades of pink, were extremely generous.

“It was like they were throwing money at us,” she said. In addition to the entrance fee, money is raised by selling do-overs called mulligans, and chances to win gift baskets.

The group presented the foundation with a $10,525 check.

The annual fundraiser was not held in 2020 because of Covid, but the group thought they’d host the tournament this year and try to raise at least a couple thousand dollars.

“We were surprisingly very happy,” Romano said. “We didn’t anticipate that kind of money. We all feel wonderful.”

She said some club members have had scares about breast cancer, and participating in the fundraiser is a way to help.

“They feel like they are doing something for themselves and their families, but also for the greater community,” she said.

The tournament, with a shotgun start, also included a bag lunch and raffle tickets for chances to win golf balls, a lighthouse cruise, a woman’s golf bag with some clubs, jewelry and a man’s watch. There were also gift certificates to local stores and restaurants and two baskets geared toward children. The raffle was also open to those who didn’t participate in the tournament but golfed later in the day.

The country club has hosted a breast cancer fundraiser since 2010 with proceeds initially going to the Susan G. Komen Foundation. But a member of the club, Mike Morin, who is a founding member of the Terri Brodeur Foundation, urged members to donate to TBBCF, which gives 100 percent of fundraising dollars to breast cancer research

The group has raised more than $50,000 for TBBCF and in 2017 was inducted into the TBBCF 27th Mile Club, a designation given to those who go “above and beyond ” in their efforts to raise money for breast cancer research.

The foundation, founded in 2006 and based in New London, has raised more than $5.2 million and awarded $100,000 research grants to 52 physicians, clinicians and researchers working on a cure for breast cancer and a better way to treat those already diagnosed.