Taking life back from cancer 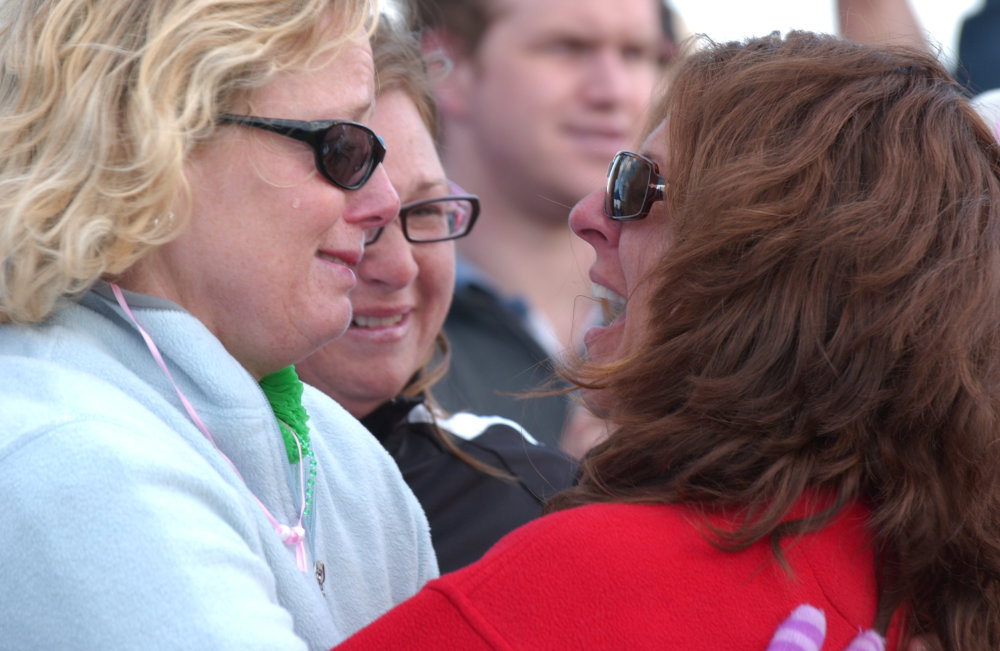 Taking life back from cancer

An ongoing series about life after a breast cancer diagnosis at age 31.

This column isn’t about me. It’s about two other cancer patients, one whom I know intimately because I share half his genes and see him all the time, and the other is an eternally 9-year-old girl I only know through Facebook.

Earlier this month, the many thousands of people following the journey of Madeline Guarraia learned the East Lyme girl had passed away at age 9 after spending about half her life battling leukemia. Her family is celebrating her life in a ceremony at the East Lyme football field Saturday from 7 to 9 p.m. The celebration is open to the public, as is the Mad About Madeline page on Facebook that her mother, Amie, frequently updated with her beautiful, soul-searing writing as the family went to the ends of the Earth to try to find Madeline a cure. More details on the ceremony for Madeline can be found on the Facebook page.

Meanwhile, Amie continues to eloquently share her unimaginable grief with the world nearly a month after her daughter’s passing. She shared that Madeline loved tigers, and four days after she died an article from Scientific American announced that the wild tiger population is increasing for the first time in a century.

When I learned Madeline had died, I was at work in Madison. I had to leave my desk. I got in my car, drove down the road to Hammonasset Beach State Park, and cried even though I wasn’t sure I had a right to. I didn’t know the family. Who was I to grieve the loss of a child I’d never met?

Maybe I wasn’t solely grieving the loss of Madeline. As much as I’m sure I would miss her had I known her, I unfortunately didn’t — although from her mother’s description of Madeline’s strength and personality throughout her cancer fight, it certainly seems as though the world must be a duller place without her. Maybe I was crying in frustration at the powerlessness cancer can still sometimes force onto families and patients in spite of the advances medicine continues to make.

Closer to home, my father’s recurrent nasopharyngeal cancer continues to live up to its name and, well, recur. Since he’s being scanned every few months, his surgeon is able to catch and remove the sketchy parts before they can become full-blown tumors, which is good. A few spots in his neck lit up during his last PET scan, so last week his surgeon sliced open a large flap of skin on the side of his neck, scraped out the cancerous tissue, and stapled him back up. He looks like Frankenstein but he’s feeling good. He’s getting the other side operated on next week. They can’t do both sides at once in case his throat swells, since eating and breathing are kind of important.

I’ve watched cancer age my father about 20 years in the past two. I know logically that my parents are not immortal but it’s hard to see my father, who’s only 56, continue to get beat up by this cancer and its treatments. Sometimes, when my thoughts go to dark places, I wonder how much longer his doctors can keep his cancer at bay. I often think of a home video of him when he was around my age and walking his trademark bouncy walk, young and healthy, looking like a giant Boy Scout. He was the Cubmaster for our town’s Boy Scout troop and he was running the Pinewood Derby in the elementary school gymnasium. I thought he would always be like that. I’d turn 40, 50, 60 and he’d still be there, young, sprightly and laughing.

It’s unfair that he got cancer (in case anyone’s wondering, no, he never smoked, not that that would make it fair), and it’s exponentially more unfair that innocent little Madeline with the big soul got cancer. But in a way, it changes nothing — the advice is the same for everybody, healthy or unhealthy, young or old: Live your life, love your friends and family, and do good in this world. You’re not as powerless as you might think.