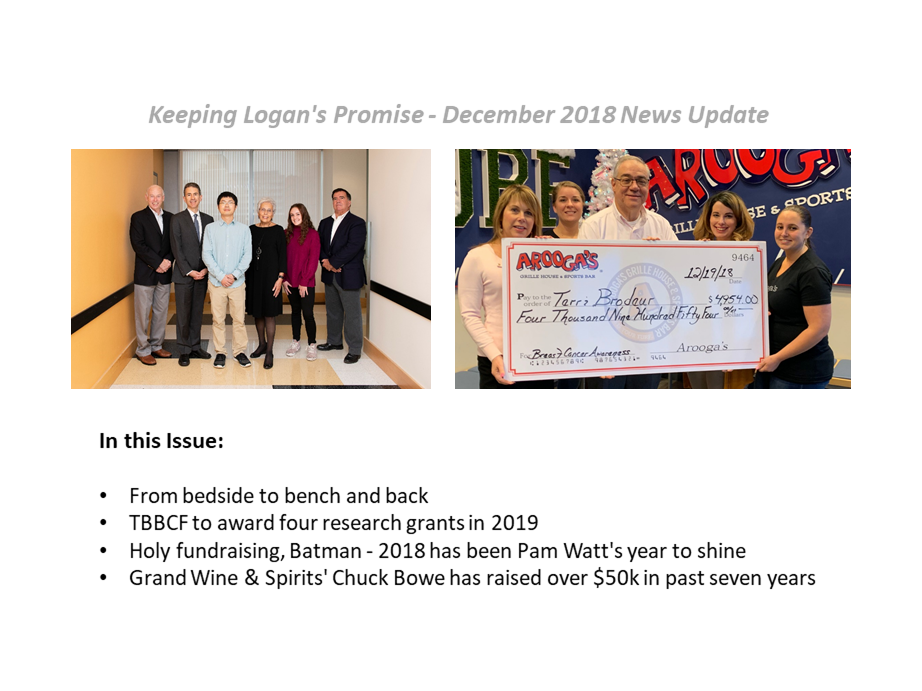 Dear Supporters,
During this busy time of year, we hope you are all able to celebrate the spirit of the season with your loved ones. In this final newsletter issue for 2018, our top stories focus on the foundation’s grant process and place a spotlight on the incredible generosity of two of our top supporters.

In November we stopped by Mass General Hospital in Boston and visited with Dr. Sheng Sun, a 2018 grant recipient. He gave members of the Scientific Advisory Board an update on his research and a tour of his lab where he is trying to figure out why some breast cancers respond to treatment and why some don’t. You won’t want to miss our top story for the month, From bedside to bench and back.
This year the foundation will be giving out four $100,000 grants. The Scientific Advisory Board began reviewing applications for 2019 this past October, and an announcement of the Class of 2019 will be made in early January. In December we caught up with the foundation’s treasurer, Stacey Gualtieri, CPA who has a very vested interest in the grant process administration and the success of TBBCF. Check out TBBCF to award four research grants in 2019.
People are very giving this time of year, but I find that those who are involved with TBBCF are generous all year. This month we spotlight Grand Wine & Spirits and its owner Chuck Bowe and 10-year breast cancer survivor and key foundation volunteer, Pamela Morris Watt.
Chuck has faithfully and generously contributed more than $50,000 to TBBCF since 2011. This year, Chuck and his Grand Wine & Spirits employees raised $9,000. The business is also unique in that it is a Sapphire Sponsor, which means $1,000 helps with operating expenses. The rest goes directly to support research.
Over the years, Pam and her Pink Posse have raised nearly  $100,000  for TBBCF.  This year, Pam and   her walk team   raised nearly $25,000, an all-time record.This has been Pam’s year to shine. Holy fundraising, Batman
Wishing you and yours a Happy New Year from all of us at the Terri Brodeur Breast Cancer Foundation,
Sandy Maniscalco

From bedside to bench and back
By KATHLEEN EDGECOMB

Dr. Sheng Sun in his lab at Mass General Hospital

A few years ago, the doctors at the Center for Breast Cancer at Massachusetts General Hospital treated a 56-year-old woman with breast cancer who had no identifiable abnormalities to put her at high risk for recurrence. But two years later, the disease came roaring back. The patient died four years from diagnosis.

The case spurred a project at the cancer center to study the blood of cancer patients to look for clues as to why the cancer had come back with such a vengeance. The Terri Brodeur Breast Cancer Foundation awarded a $100,000 research grant in 2018 to Dr. Sun, who is working on the study at Mass General under the direction of Leif Ellisen, MD, PhD, program director of the Mass General Cancer Center.
Dr. Sun explained his work in an animated and technical presentation to John LaMattina, PhD, president of the TBBCF board of directors and co-chair of the scientific advisory board; Michael Morin, PhD, scientific advisory board member; and Sandy Maniscalco, co-founder and director of development and outreach for TBBCF.   Full story

The Terri Brodeur Breast Cancer Foundation, which annually raises more than $300,000 that directly funds three $100,000 research grants, will award four grants in 2019. It is the fifth time in the organizations 13-year history that four grants will be handed out.

The foundation raises money from its annual marathon walk held every October and from fundraisers put on by individuals. The $100,000 for this year’s fourth grant comes from unspent donations raised from previous years and from researchers who finished their projects ahead of schedule, or moved on, and returned unused funds.
Stacey Gualtieri, a certified public accountant and treasurer of TBBCF, said the grants may fund one researcher, but the benefits can go far beyond.  “We provide seed money for something much bigger,” she said. “We fund research that is potentially bigger than us.” Full story

Pictured (l-r) Amanda Latham, Caroline Bowe, Chuck Bowe, Sandy Maniscalco and Deb Gillig
Grand Wine and Spirits, a faithful supporter of the Terri Brodeur Breast Cancer Foundation, continued its dedication this year and raised more than $9,000 during its fall breast cancer awareness fundraising campaign.
On Tuesday, Dec. 11, Chuck Bowe, owner of Grand Wine and Spirits, presented a check to Sandy Maniscalco, co-founder of TBBCF, and Deb Gillig, TBBCF events and promotions coordinator.
Since 2011, Grand Wine and Spirits has raised more than $50,000 for TBBCF through their breast cancer awareness month campaigns and other seasonal promotions.  The company also has been a Sapphire Sponsor for the past three years.  The $9,000 raised during this year’s breast cancer awareness campaign directly supports breast cancer research.  The $1,000 Sapphire sponsorship helps the foundation underwrite expense.  Full story

Holy fundraising, Batman – 2018 has been Pam Watt’s year to shine

Pictured (l-r) Pamela Morris Watt, Marlee Krodel, Bob Siana, Ashlee Smith, and Brittany Hust
As of this writing, Watt and Pam’s Pink Posse have raised nearly $25,000 for the 13th Annual Walk Across Southeastern CT. This is an all-time record.
On December 19, Arooga Grille House & Sports Bar staff presented Watt with a check for the proceeds from their 3rd annual breast cancer awareness month promotion and “tip a server” events at the Uncasville and Shelton restaurants. Arooga’s raised $4,954 for her and the Posse.
Arooga’s was one of two fundraising endeavors hosted by Watt and her team.  They also hosted the 4th Annual Steak Night at the Birdseye Café in New London where Watt and her team raised $6,150.
On April 7, Watt was honored by Jefferson Radiology as a Hartford Yard Goats baseball game in Hartford where she threw the ceremonial first pitch.
On May 8, Watt was also inducted this year into the foundation’s 27th Mile Club, which honors volunteers who have contributed outstanding support to TBBCF.  Full story