The Waterford Police Department designed a shirt and changed its patches to pink for the month of October, raising more than $1,500 for the Terri Brodeur Foundation. 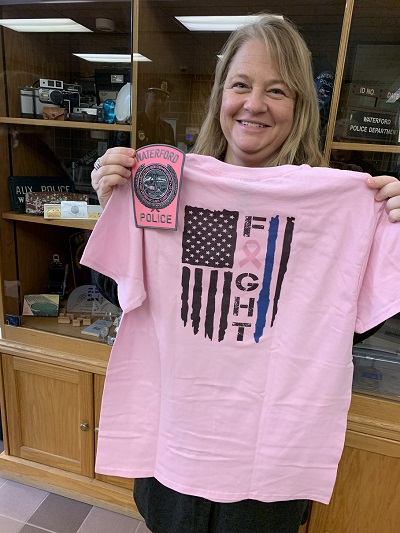 On Dec.1, 2021, representatives of the department presented TBF with two t-shirts, a patch, and $1,540. All the money will go toward research grants to find a cure for breast cancer.

“We are a very community-oriented department,” said Lt. Marc Balestracci, interim chief, during an early morning gathering of police officers and members of the foundation in the lobby of the police department.

“And we are part of this community,” added Officer Eric Fredericks, community engagement officer.

Members of the department and the public bought the pink shirts, specially designed to promote breast cancer awareness, and 17 officers purchased and wore the pink WPD patches during October. The shirts were designed by Det. Leigh Bonkowski.

“The Waterford Police department has been a great supporter of the foundation on our Walk Day each year, so when they called to say they also wanted to do a fundraiser for us in October, we were so excited,” said Patti Burmahl, president of the TBF board. “We thank them for all they do in the community and are especially appreciative of their donation to the foundation from the pink patch fundraiser to help us find a cure for breast cancer.”

Burmahl and Amy Caster, Development and Outreach Director, accepted the donation on behalf of the foundation.

The idea for the fundraiser came from former Chief Brett Mahoney, who retired in October, Balestracci said. Members of the department plan to hold the same fundraiser next year and want to do a similar campaign in April to raise money and awareness for Autism.

Waterford is the second department in the area to go pink in October for TBF by selling police patches. Last year, members of Groton Town Police also donated to TBF.